I have time to burn from work.  There’s cold weather coming in Thanksgiving day.  It’s nice now, so why not ride?

The trees should be nice down south, and the roads around Leakey are great for moto riding.  Sounds like a plan.  I invite Debbie for an over-nighter, but she says she has to knock some stuff out.  So, it looks like a solo ride.

I’m riding at 8:00 with clouds and haze in the morning making me wonder what the day will bring.  Fighting Tuesday traffic out of town is not too cool, but as soon as I get south of the metromess and head west through Maypearl, the quiet two-lane roads look more appealing.

I take an excursion off of my planned route to explore FM 56 west of Lake Whitney, pass through Clifton, and get back on my route at Cranfills Gap.

The further west and south I ride, the more the sky clears, and I finally switch to my dark shades for the ride. 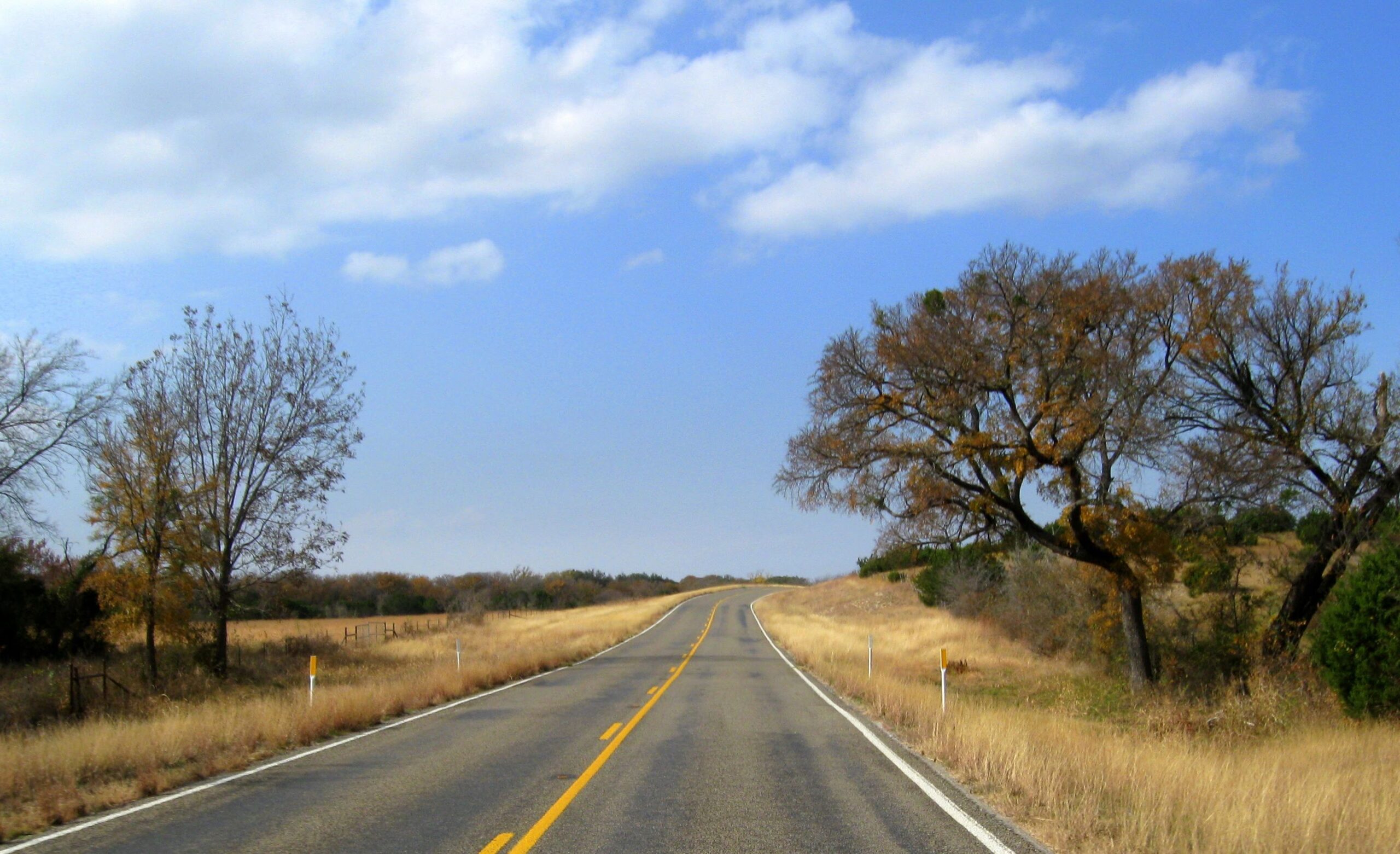 As I got further south and west, the blue skies appeared

I pick up the always pleasing Hwy 16 at Goldthwaite, and follow it south through Fredericksburg and Kerrville, where the roads immediately get technical down to Medina. 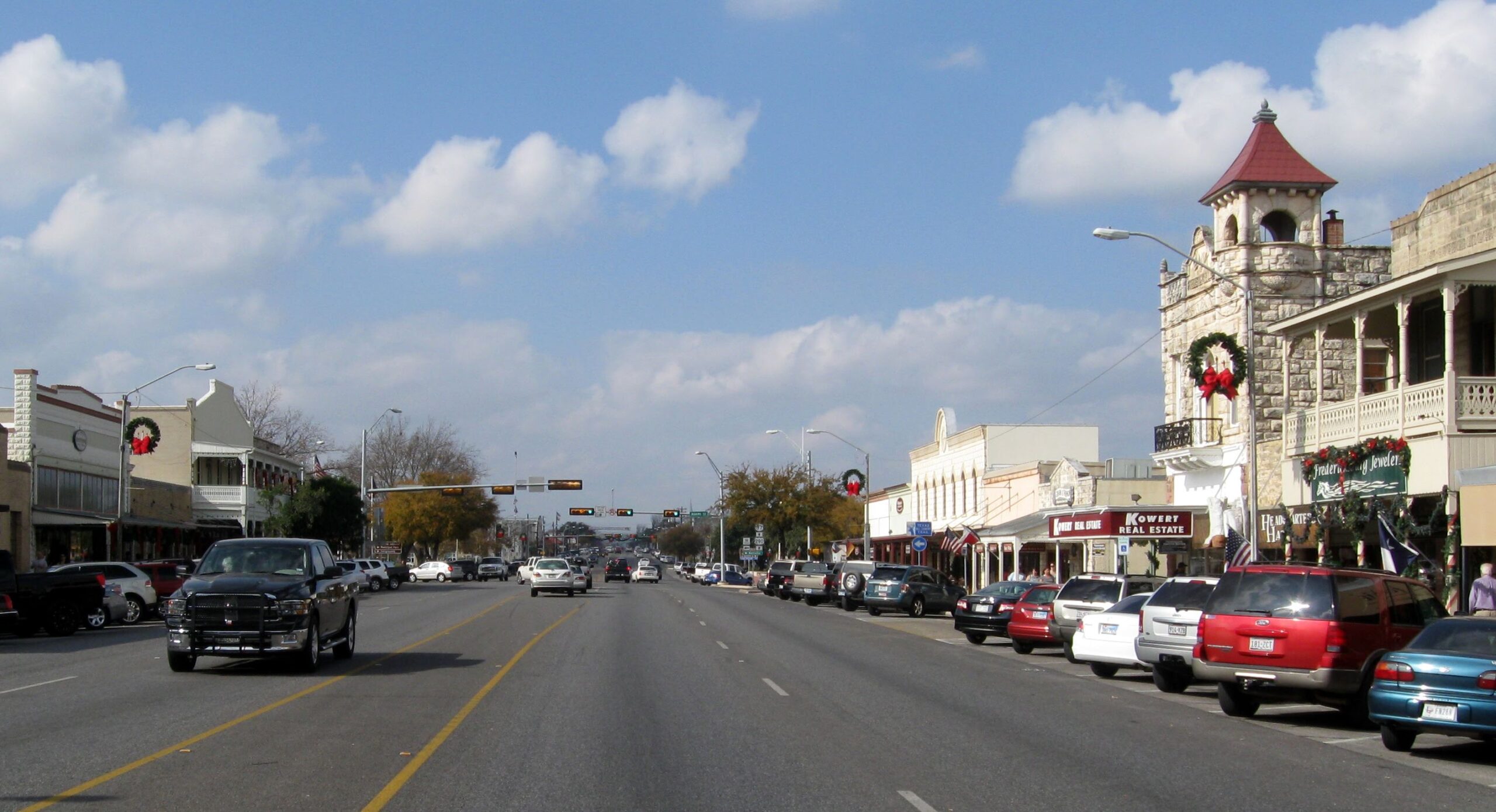 Fredericksburg had lots of people walking around, and it’s Tuesday. 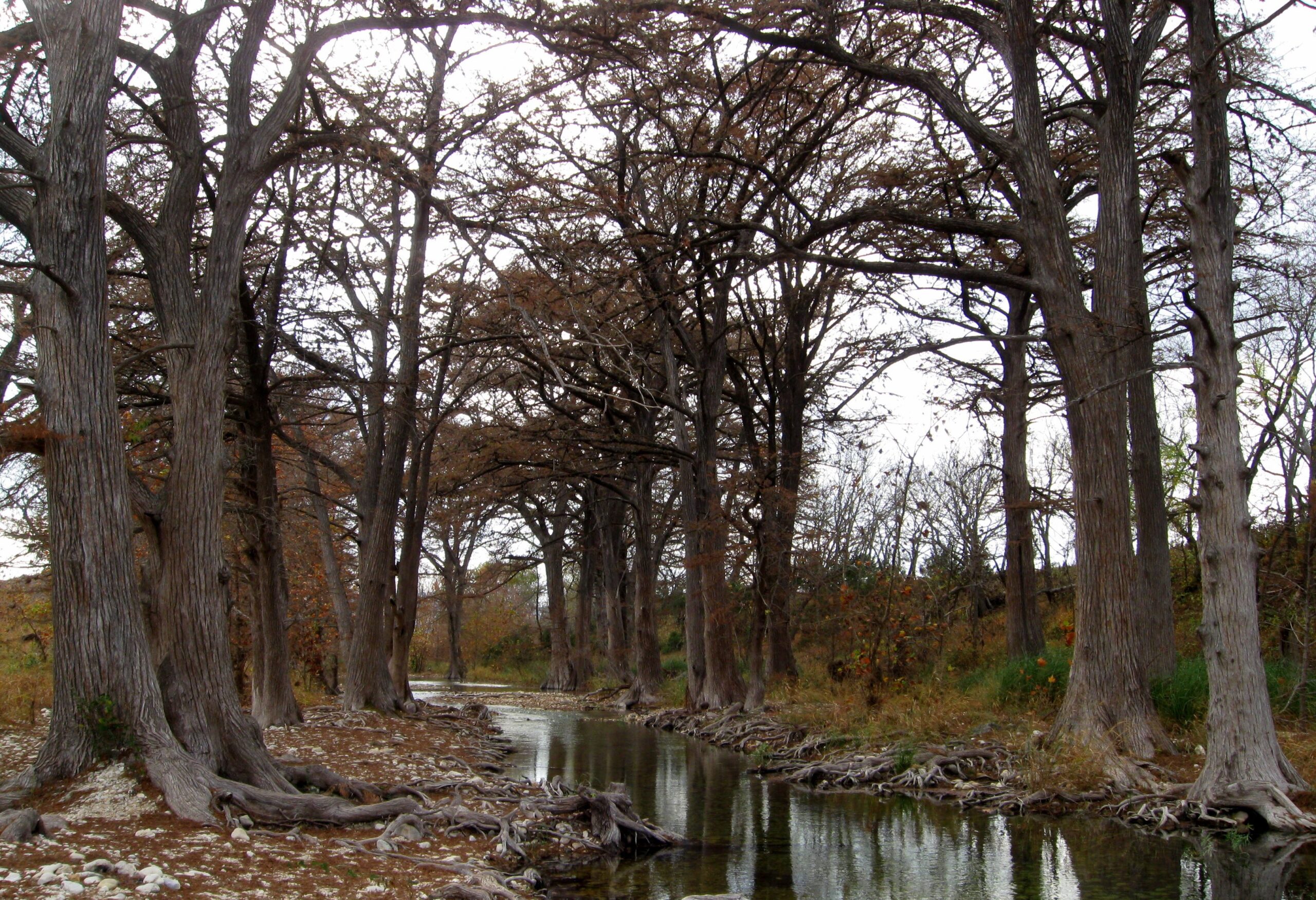 Then it’s on west on 337, where some very nice Texas Hill Country vistas appear below me as I climb higher. 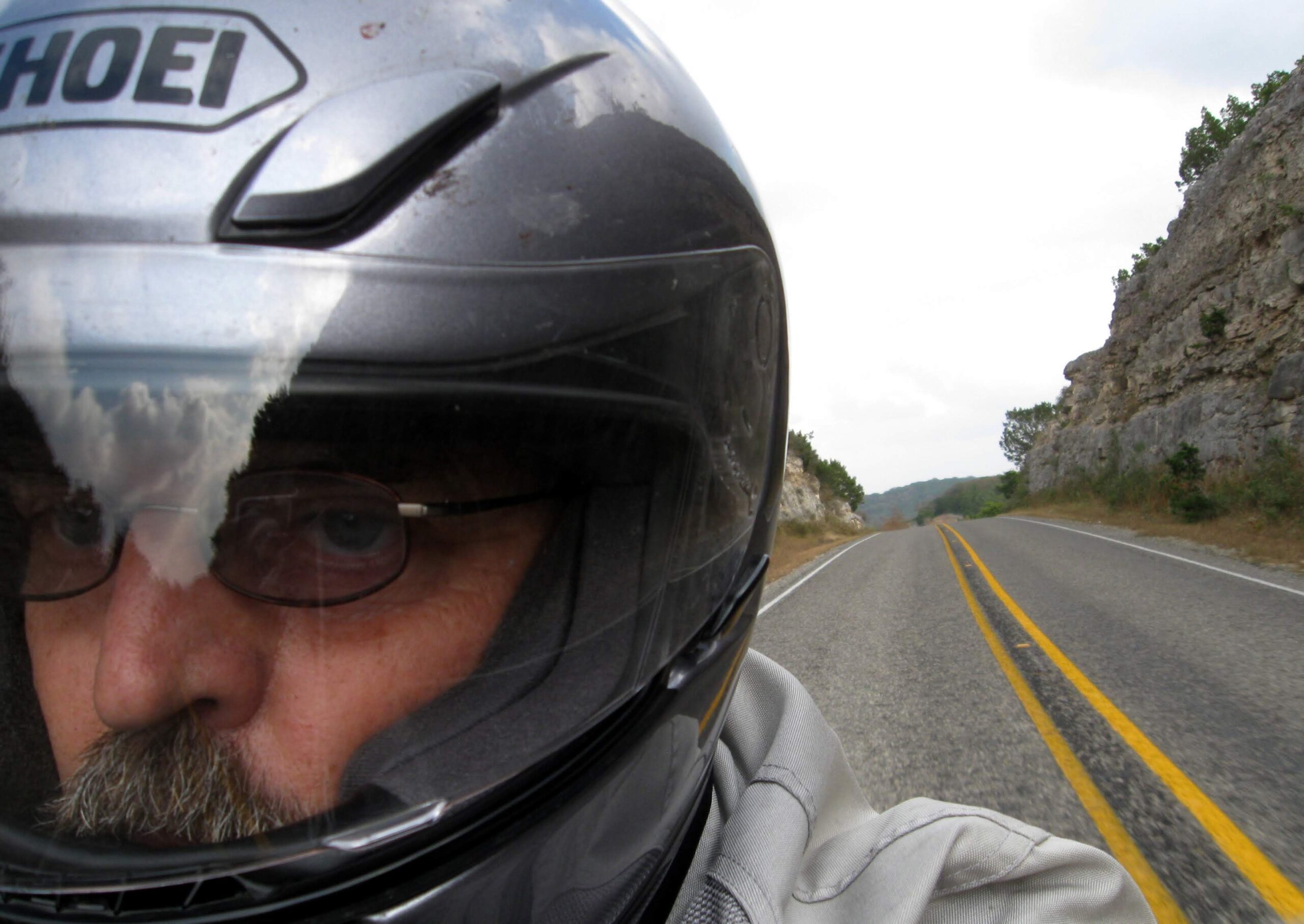 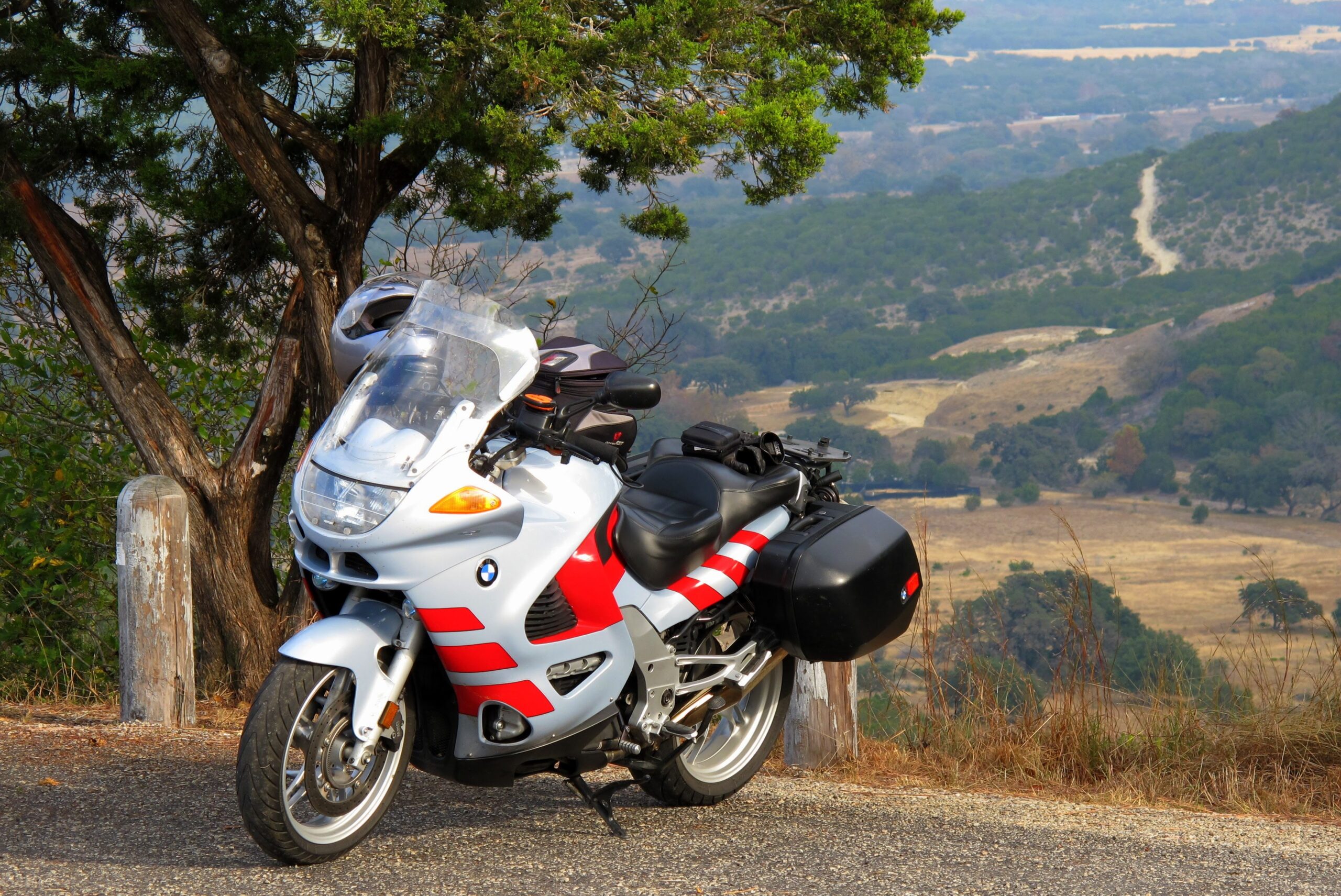 I rolled on into Leakey just before 4:00, and rode around looking for a place to stay.  Nothing seemed to click, so I decided to eat BBQ at the Hog Pen for the moment.  I’m sure my BMW was having a bit of an identity crisis here at this v-twin hangout.  But the sandwich was good.  I asked a couple where they had ridden from, and they responded with Belton.  I told them I had come down from the Dallas area this morning, and was thinking of heading on back this evening to sleep in my own bed.  There was silence, and a bit of disbelief showing on their faces.  But that was indeed what I had just decided.  I buzzed Deb, and told her I’d be home around 10:00. 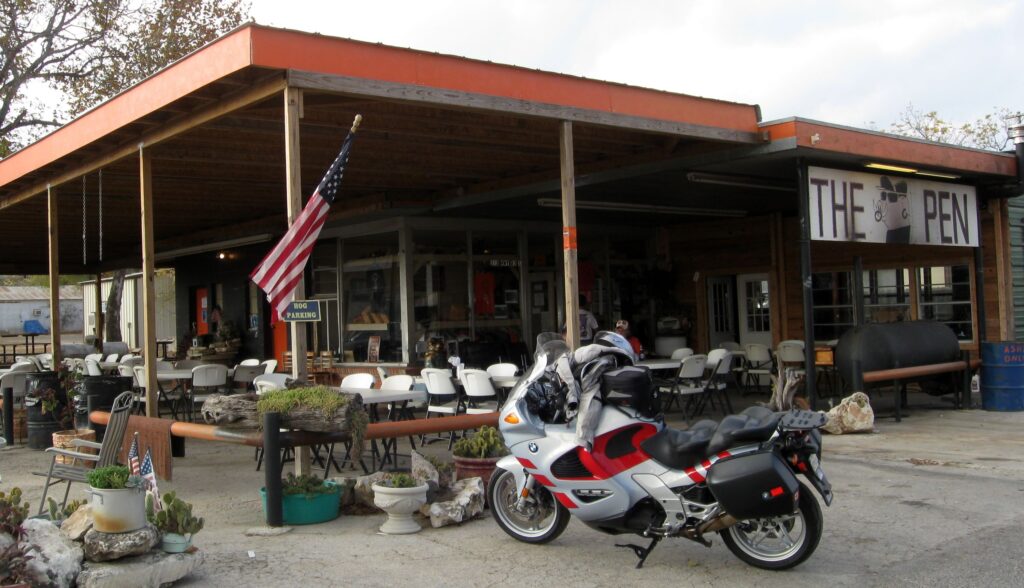 I’m sure my BMW was confused at this v-twin hangout. Good BBQ sandwich.

Ranch Road 336 north of Leakey was a blast.  It was like a roller coaster with a nice view.  I saw nobody else on the road all the way between Leakey and where 336 intersected Hwy 41. 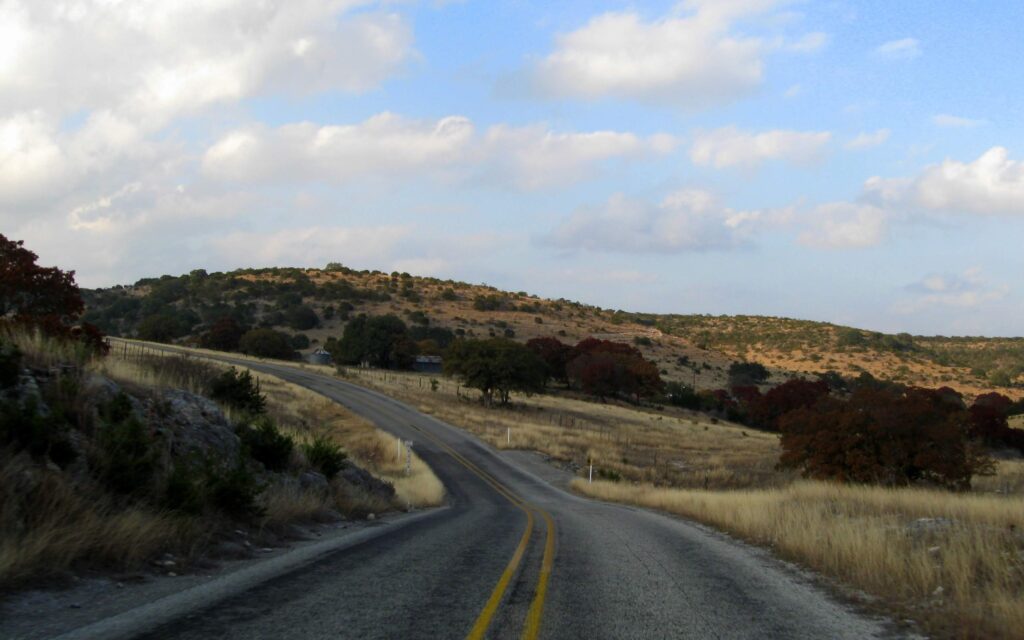 I was making pretty good time while there was still daylight, knowing Bambies would be showing up very soon.  And they did.  I even saw one buck with a large rack and spots.  I have never seen that before.  I dropped the speed to a point that I felt safe enough to respond to deer wanting to share the road with me. 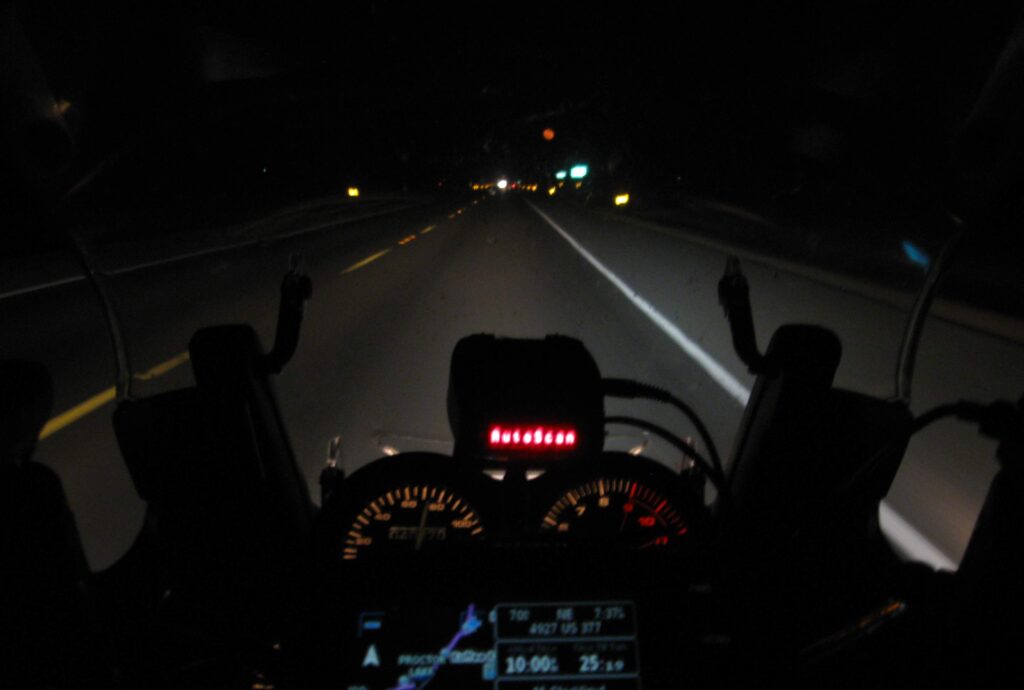 Night ride return. Note the orange dot. That was the moon.

With all of the deer about, I modified my planned return to stay on the major roads as much as possible, and intersected I-20 at Santo.  I fueled up, and started my last segment towards home.  I left the ramp onto the interstate, accelerated around a truck, and was immediately pulled over by a Texas State Trooper.

Officer Blue said I was going a “couple of miles” over the posted speed.  He asked for my license and insurance, and his partner ran me on their system.  While that was going on, he walked all around the KRS and asked me all sorts of questions about the bike.  I believe he had a true interest in it.  He asked where I had come from, and when I had told him of my day, I could see he was adding up the ~700 miles and responded “so you’re just out for a ride…”  Then he took a look at the back fender, and said my inspection was expired, which I did not realize.  Now I’m thinking I’m going to get all sorts of souvenirs from this.  He asked what’s up with the Canada flag on my bag, and I responded that I rode around 6,000 miles to pick that up in July.  He looked at me for a while, and said they could let me off with a warning tonight.  Nice…

Blue and his partner left me on the side of the road, lights flashing to pull over another traveler.  I saw this pattern all the way back home on the interstate.  Probably part of the holiday week traffic patrol.

The day was a nice one, and I was happy I chose to come on back and cozy up with Deb. 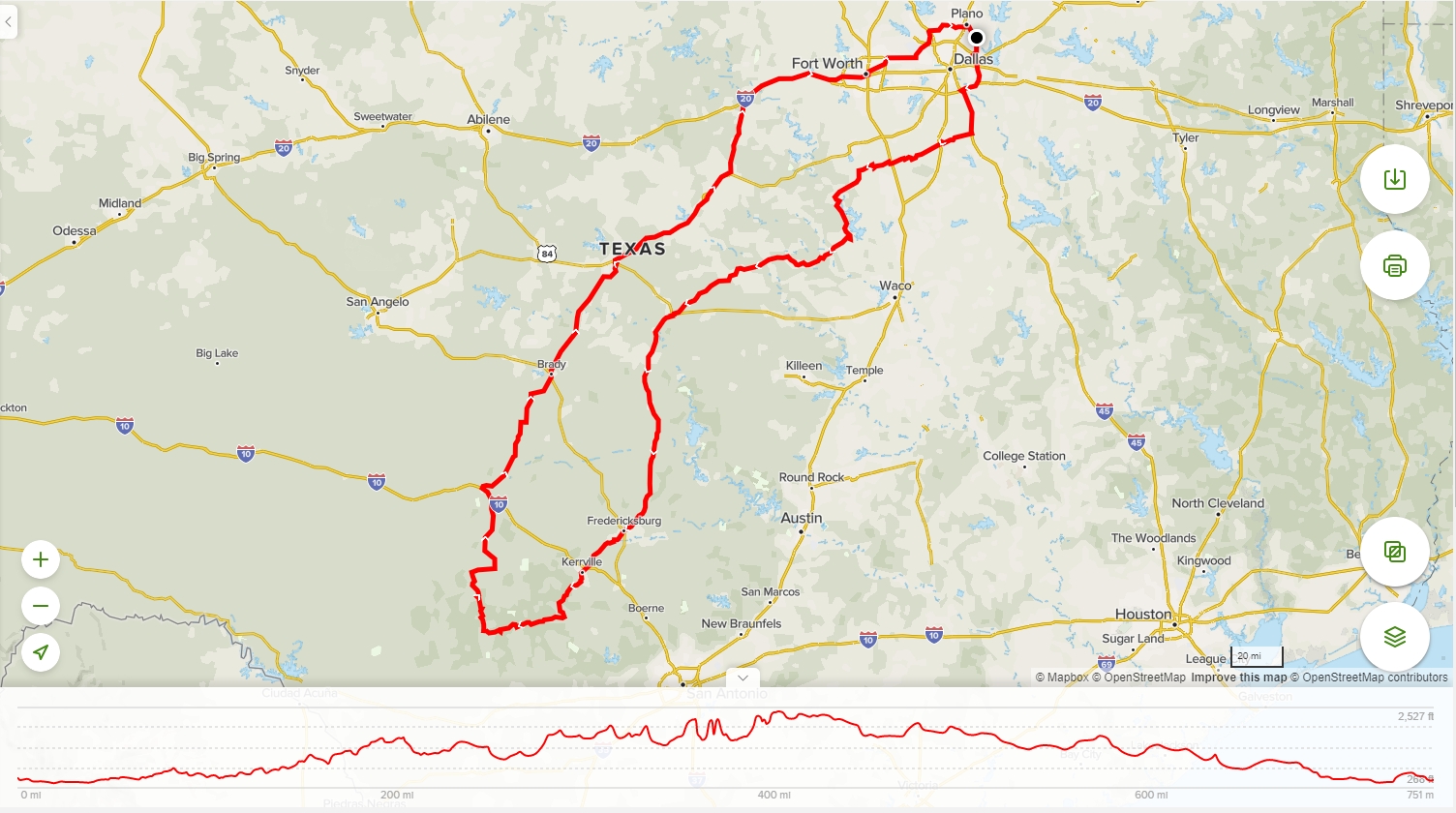