Debbie and I had an early-morning breakfast and put the gear on for the dreaded morning rush hour trek out of Dallas.  We planned the exit from the metromess against the grain to meet up with the Lone Star BMW Riders main pack in Lometa for lunch.  The bad thing about heading south out of DFW is the 60 mile journey through the city and surrounding towns before the traffic lightens up to a relaxing ride.  But, when we finally cleared the last of the trucks around Rio Vista, the payoff was worth it.  We pulled off at a rest stop where I told Deb that these are the roads I seek, with very little traffic and interesting scenery and character all around.

We rolled up to the Wagon Wheel in Lometa for lunch.  This was the decided place to meet the rest of the group.  It was all you can eat Catfish Friday, so mass consumption ensued…,  and it was darn good.  Deb and I visited with a bunch of the locals, including Gaylon, who moved from the West Texas oil fields around five years ago.  Doyle Combs dropped by the table and told stories about riding back in the 70’s.  He described himself as the bus boy of the café, along with being the owner’s husband.

We rode on south and pulled off the main route to go by Enchanted Rock and return on Crabapple Road.  Stephen pulled the group to a stop at Crabapple School by a stone church built in 1897.  The temperature was rising and it was time to get the air and bikes moving again.  Debbie wanted a cold drink, so I suggested Luckenbach, and Tom and Jim followed along.

On to Koyote Ranch south of Kerrville and another gathering of riders for socializing.  We watched the radar images of strong storms building to the west and speculated as to when they would hit the Hill Country.

As we were sitting on the cabin steps listening to the evening melody of frogs, I noticed flashes of lightning over the hills.  The longer we watched, the brighter and more frequent the flashes became, but it was strangely quiet.  We hit the rock-hard bunks and somehow fell asleep quickly.

We awoke to clouds but no major rain.  We made our way to the grill for breakfast and looked over the radar images.  Seeing that the rain was building on top of us and drifting east, we opted for a west ride.

Picking our way through the twisty turns of Hwy 16 and 337 in the rain demanded acute attention.  Debbie grabbed my waist tightly on one particular turn.  I’m probably still bruised from that one.

Alamo Village north of Brackettville was the destination.  This is a movie set originally put together for John Wayne’s 1959 production of The Alamo.  We stumbled across the 50th anniversary of this unlikely village out in the middle of nowhere.  There are many opportunities for the study of light through photography, and I could have spent a lot longer there.

A line of storms was building quickly in the west and looking to be moving our way.  I mentioned this to the barkeep, and he said the storms always fall apart at the county line.  We had lunch in the saloon amongst the movie set history.  The town marshal and a piano-playing singer kept us entertained.

We finished up and went back to the bikes, and sure enough to the west, the billowing thunderheads were turning into wispy clouds quickly.  The return ride on 674 north to Rocksprings was fun.  As we climbed back up in the hills, the temperature dropped 10 degrees, and we donned the liners for the final misty return to Koyote Ranch via Hunt.
Riders continued returning to the camp, parking the bikes, and convening at the patio for brews and story-swapping about the day.  Stephen and Vickie rode north and east and waded through water crossings.  Looks like our ride to the west was the drier option for the day.  Food orders trickled along into the evening, and Tom sampled all that was offered to him.  That worked out fine for all parties.
The rock-hard bunk seemed less rock-hard this evening, probably due to the ride wearing us down just a bit.  But a satisfying hard-ride tiredness is a great way to retire.

I-10 was a short conduit east to get back on the desirable ranch roads towards Sisterdale.  We continued east towards 281 and took the single-lane Old Blanco Road northeast.  This road obviously had some history, and was a bit rough but with very much character.  Hwy 281 north was fast, but as we approached Marble Falls, Deb tapped on my shoulder and said “get back on the ranch roads so we can see the animals”.  Well, OK… no problem with that.

Back on the road again to enjoy the wildflowers and winding roads again on the way past Whitney and into Hillsboro.  The ride on into Ferris and up I-45 was just a method to get back into the metromess, although Beltline road east of I-45 is unexpectedly enjoyable.

Guest blogger Debbie writes:
What I learned on my bike trip (in no particular order) 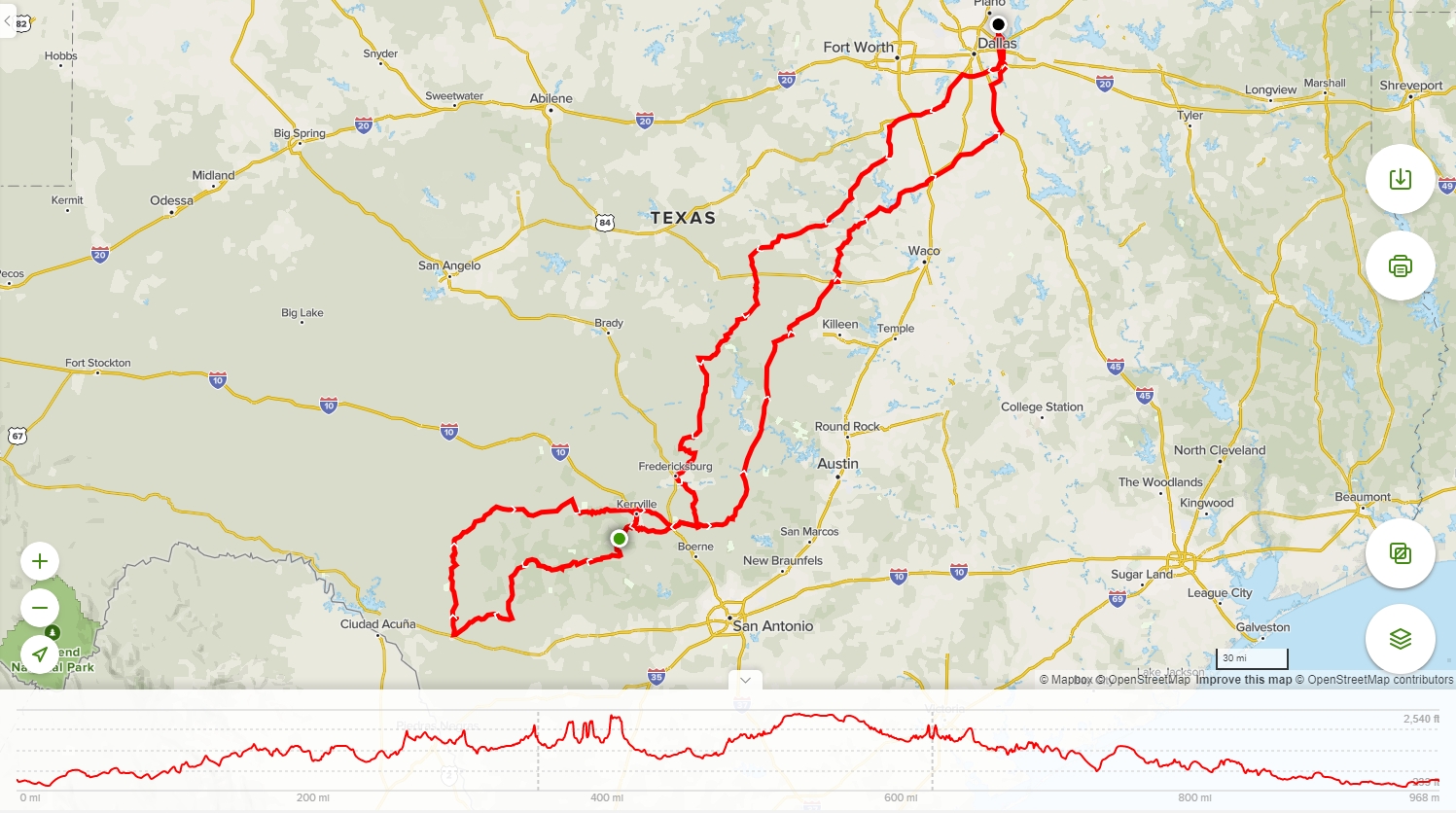