The BMW MOA Rally was in Sedalia, MO this year.  Late last year, I was making plans on traveling to the rally the long way around via the Great Lakes and Canada.  Many things have happened this year.  Wes got married, we sold our house of 27 years, moved all of our possessions in storage, built a new house, built a new hospital and then had a medical scare.  I had already decided to not do the Canada ride with getting settled in the new house and opening the new hospital in McKinney.  So, I was going to ride directly up to Sedalia, and then a medical complication that had some serious symptoms put me through some examinations that ultimately resulted in a transient condition that began to clear.  I was under anesthesia on Thursday, so nobody thought it would be a good idea if I rode 530 miles Thursday evening and Friday.  But the verdict from the medical exams was OK.  I was glad.  I wanted to ride.  Since I was feeling better, but still not to sure about a long run, riding to the Arkansas/Missouri twisties seemed like a good compromise.  Charlie was interested in joining, and was nice enough to arrange lodging at a very nice hotel Friday, and the traditional Edelwiess Inn.

Charlie arrived at my house exactly as he said at 7:20 AM Friday.  First words out of his mouth as I greeted him was “It’s already hot.”  I rolled my bike around and we headed out northeast of town towards Broken Bow.

It felt good to be back on the bike.  Deb and I rode down to Fredericksburg back in May, and that is the last time I had been on the bike for any extended time. 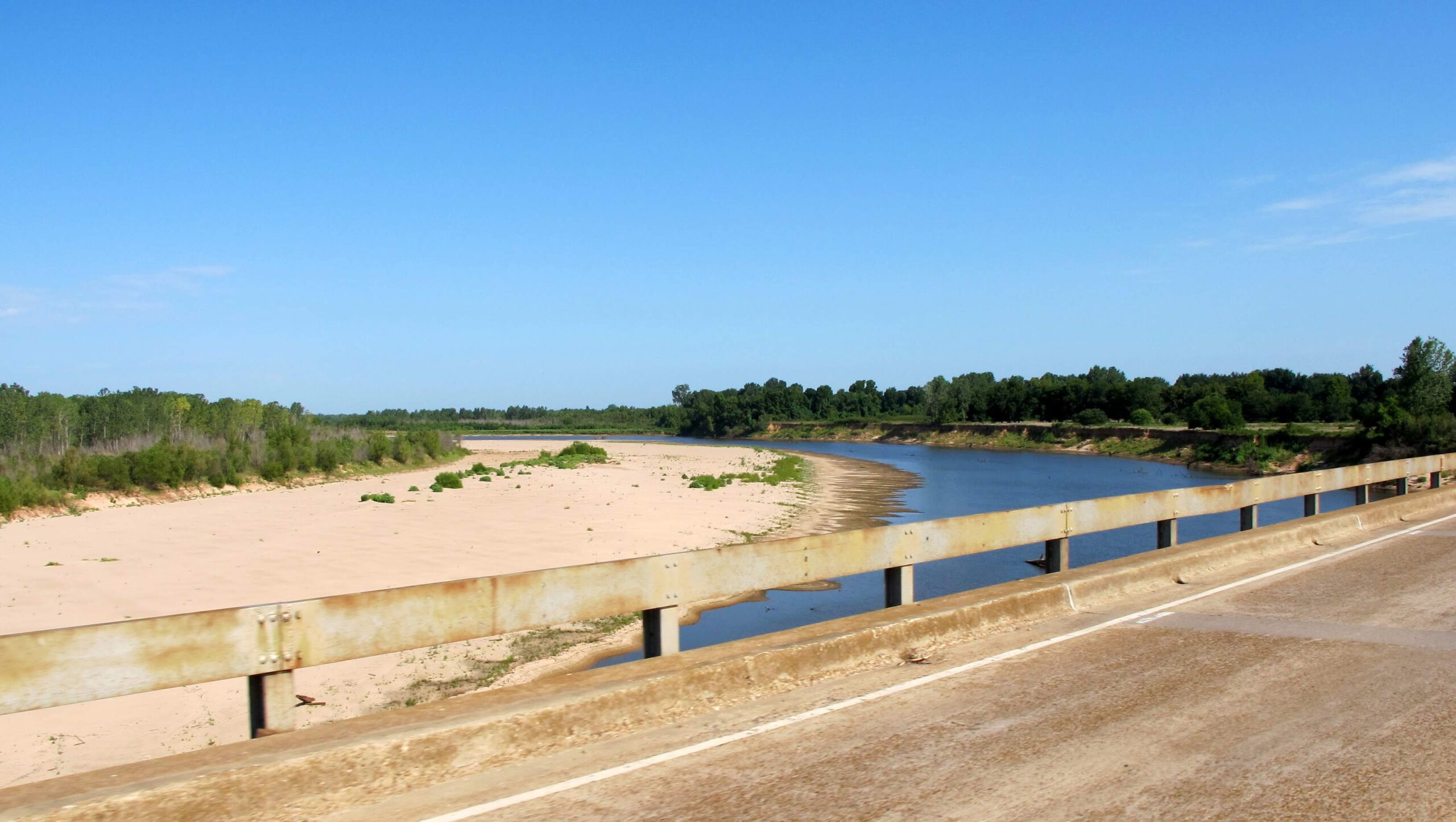 The Red River crossing came up rather quickly.  We fueled in Idabel, and rode Hwy 259 north through the tall pines and high speed sweepers and tight twisty ascents and descents over the ridges of hills. 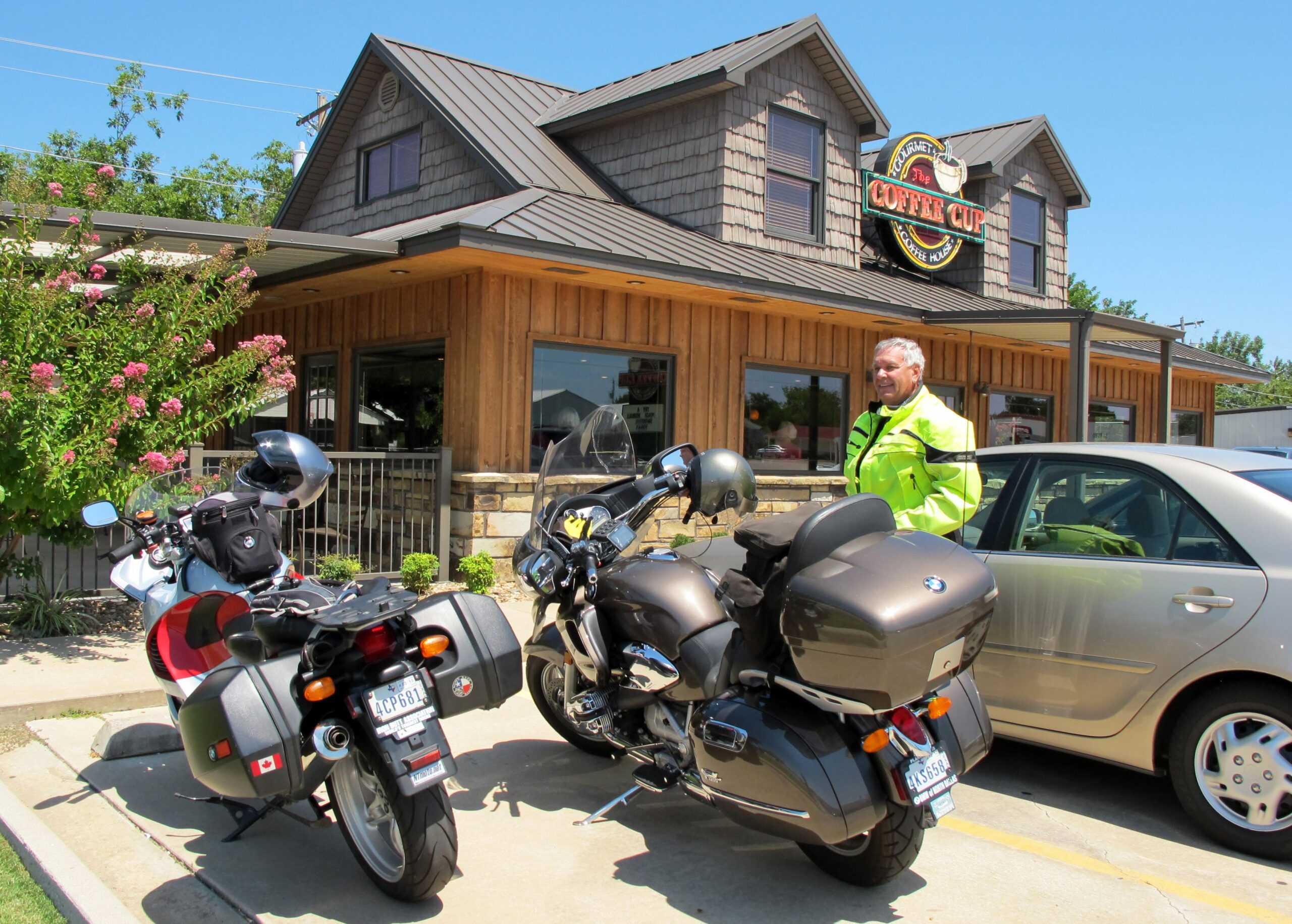 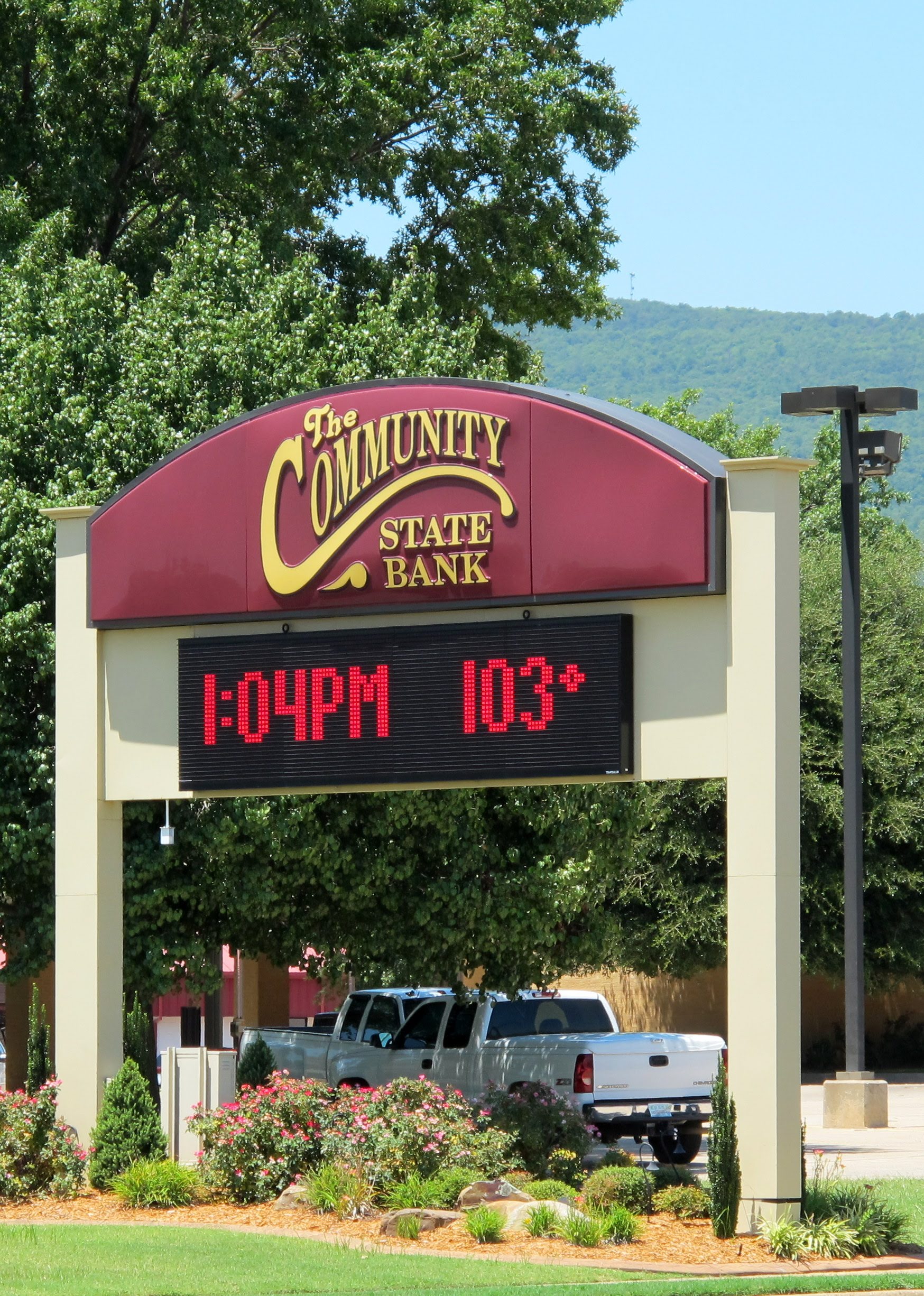 The temperature was rising as we neared the Oklahoma/Arkansas border. We stopped in a nice cafe in Poteau, and thoroughly enjoyed the air conditioning and iced tea. We fueled after lunch, and the first indication of a really hot day appeared on the time and temperature sign across the street. 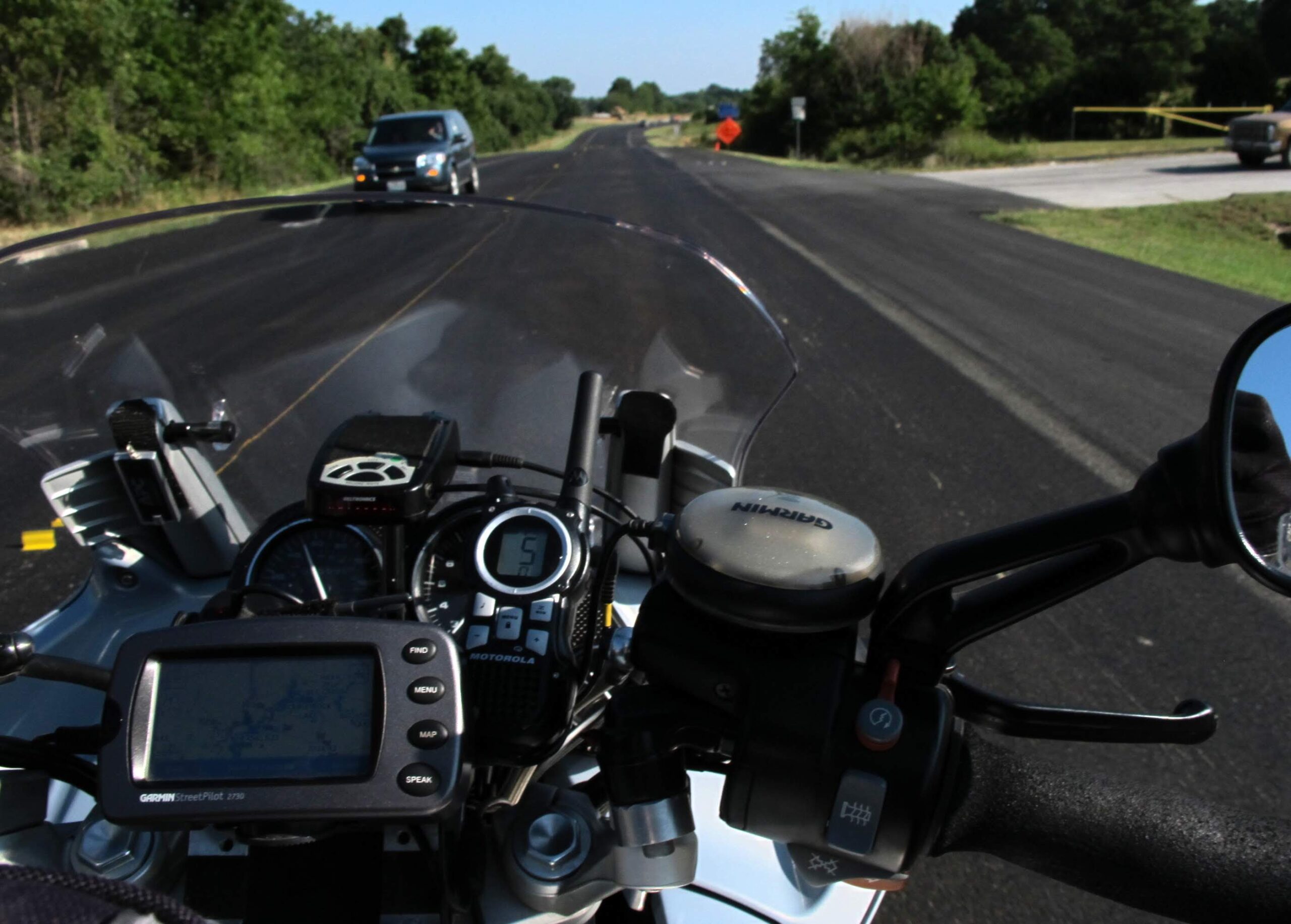 Arkansas decided to set an all-time high temperature of 108 in Fort Smith just as we were riding through.  Charlie kept handing me cold Gatorades from his iced-down cooler in his top case.  Note to self – always ride with partners with lots of storage on their motos.

We arrived in Rogers at 3:00 PM, and checked into the very nice Embassy Suites.  Once we parked the motos, we never surfaced from the cool interior of the hotel atrium.  Charlie knew well of the manager’s reception, tucked away at an edge of the restaurant.  We enjoyed cool brews, veggie and cheese snacks along with the rest of the taxidermy convention-goers.  That’s a different crowd.  I wound up meeting Russell Knight, owner of Knight’s Taxidermy in Alaska, and star of the series “Mounted in Alaska” on the History Channel. 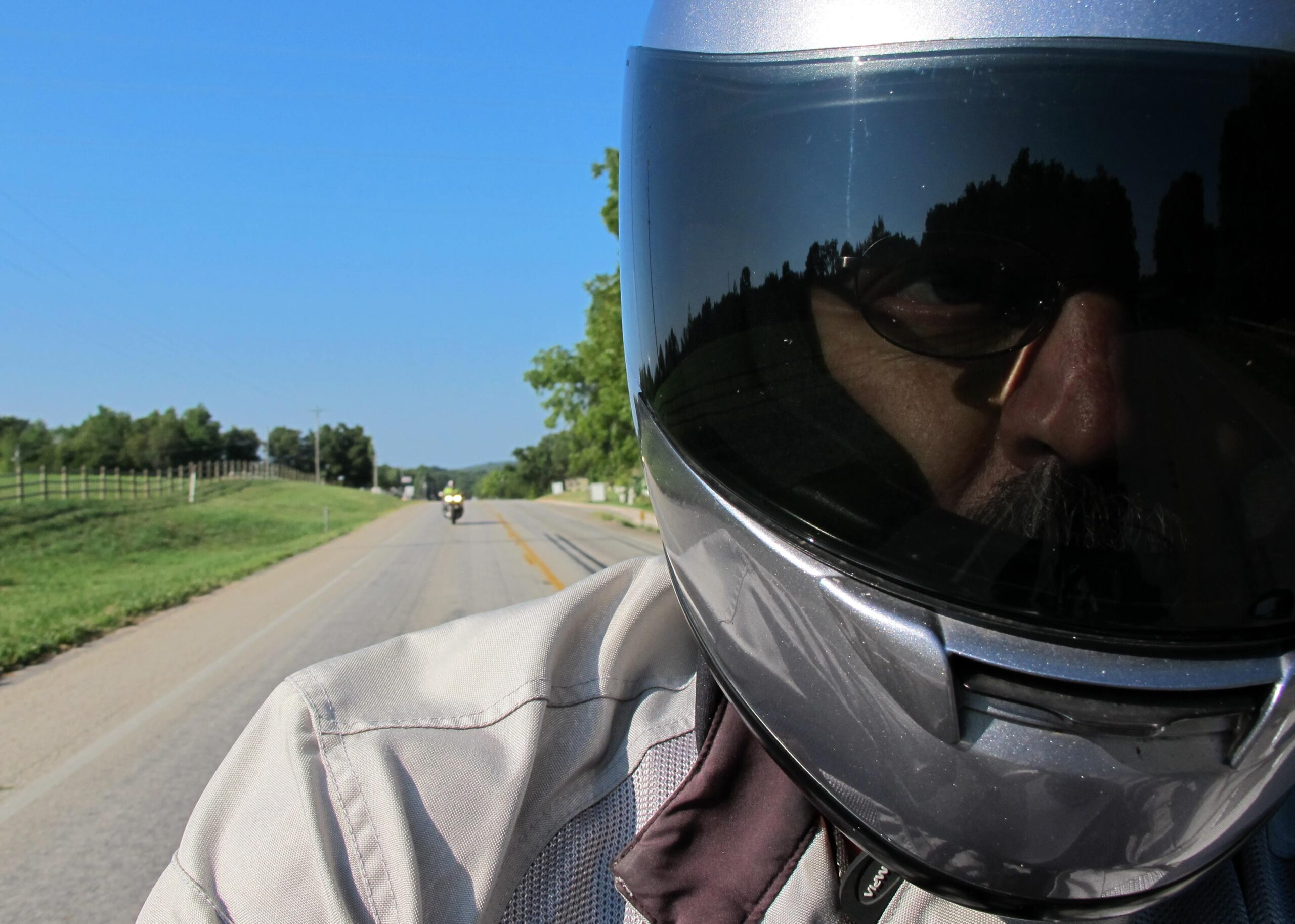 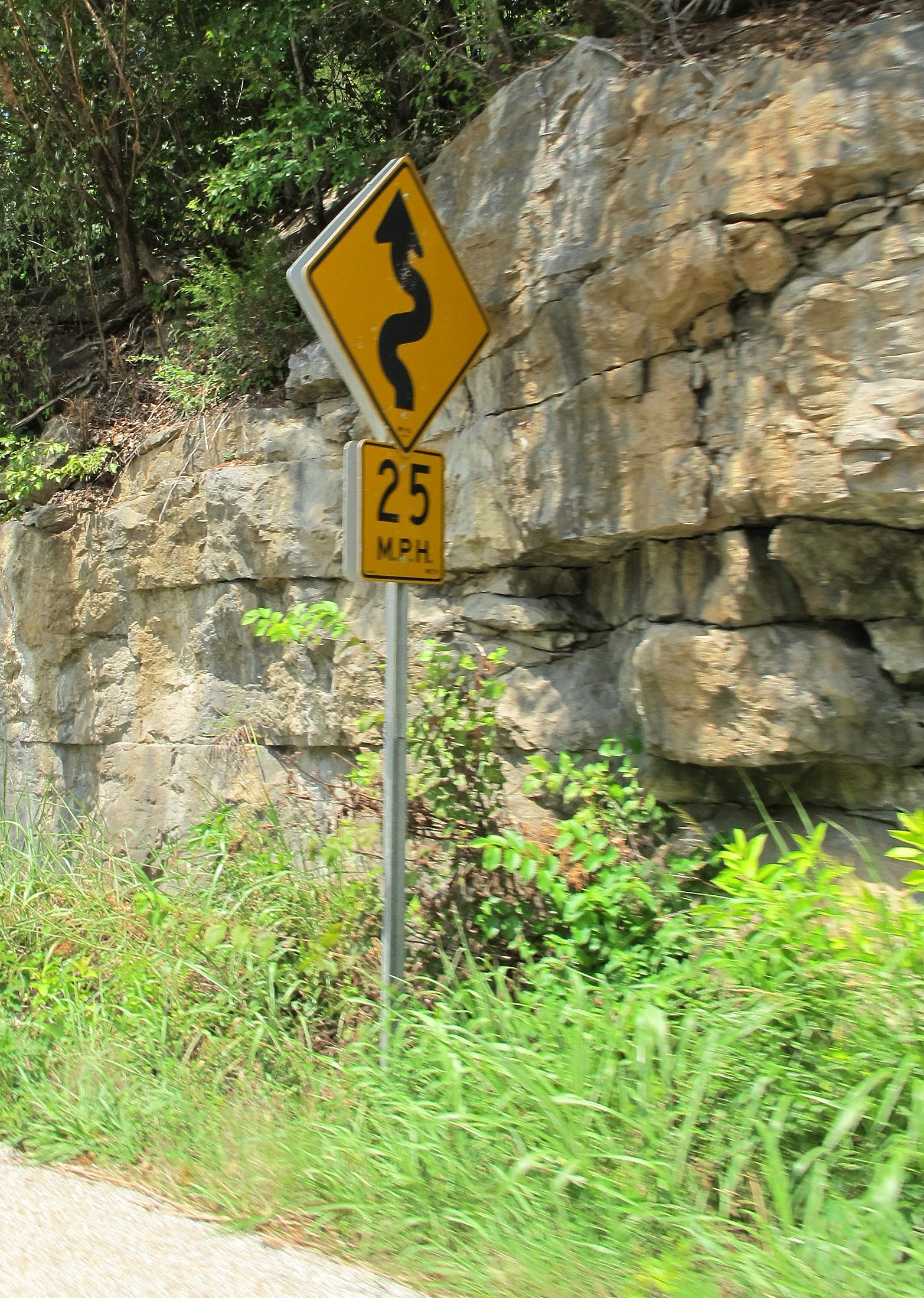 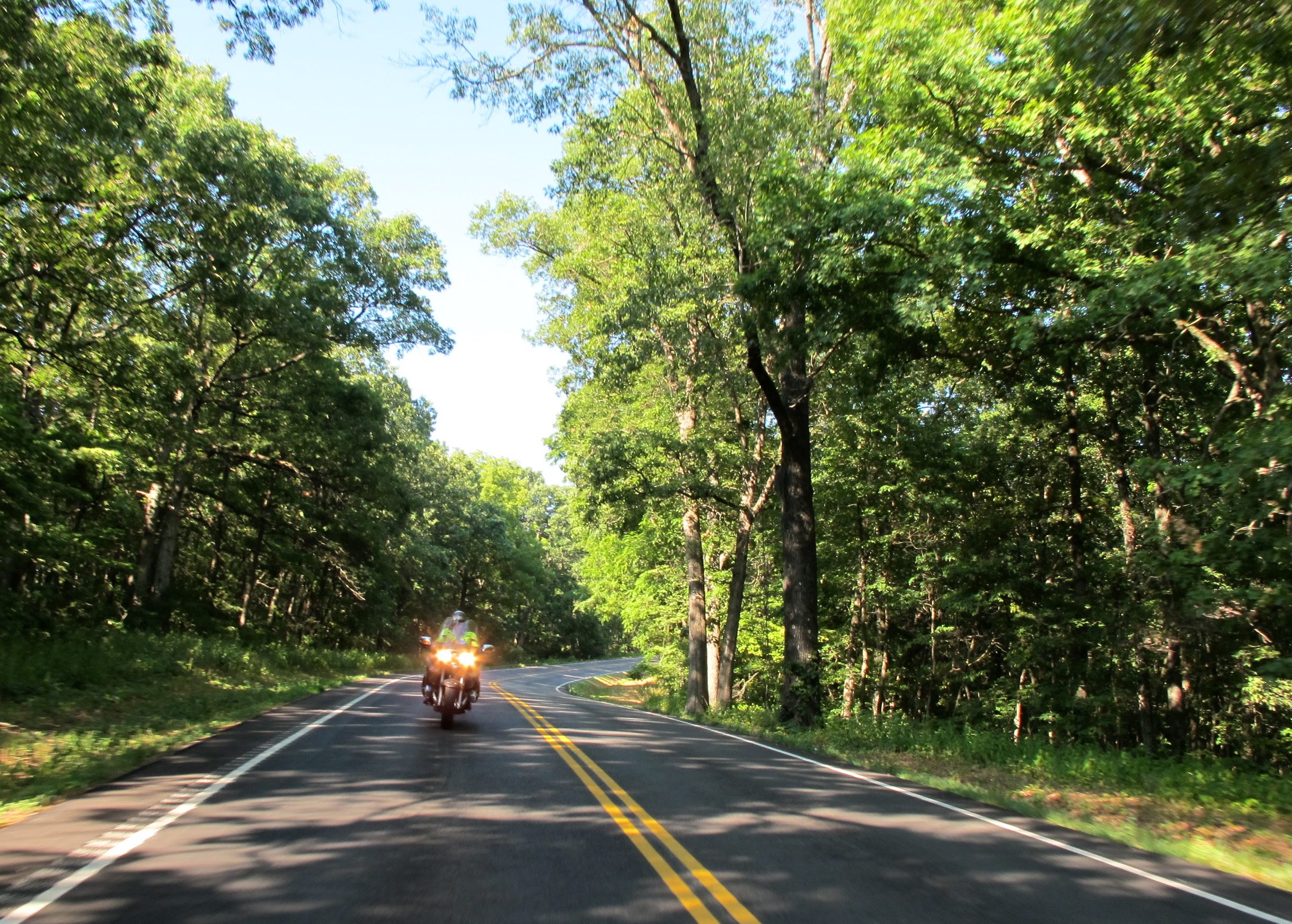 A good night’s sleep got us feeling good for the next day of twisty riding.  It was only 33 miles from Rogers to Eureka Springs, but we took the long way through Missouri.  The wooded two-lane roads was a nice shelter from the heat of the sun.  The road surfaces were nice, and traffic manageable enough to enjoy some spirited riding through the winding, hilly Missouri countryside.

We found out later that Stephen passed us on Hwy 76 in Missouri.  I thought I might have recognized him as he rode by, but my eyes were more focused on the edge of the road so i would not turn my KRS into a planter in the bar ditch.

Here’s a video of the weekend riding.  If you watch closely, you’ll see Yeeha Stephen riding the opposite direction from us on Hwy 76 in Missouri. 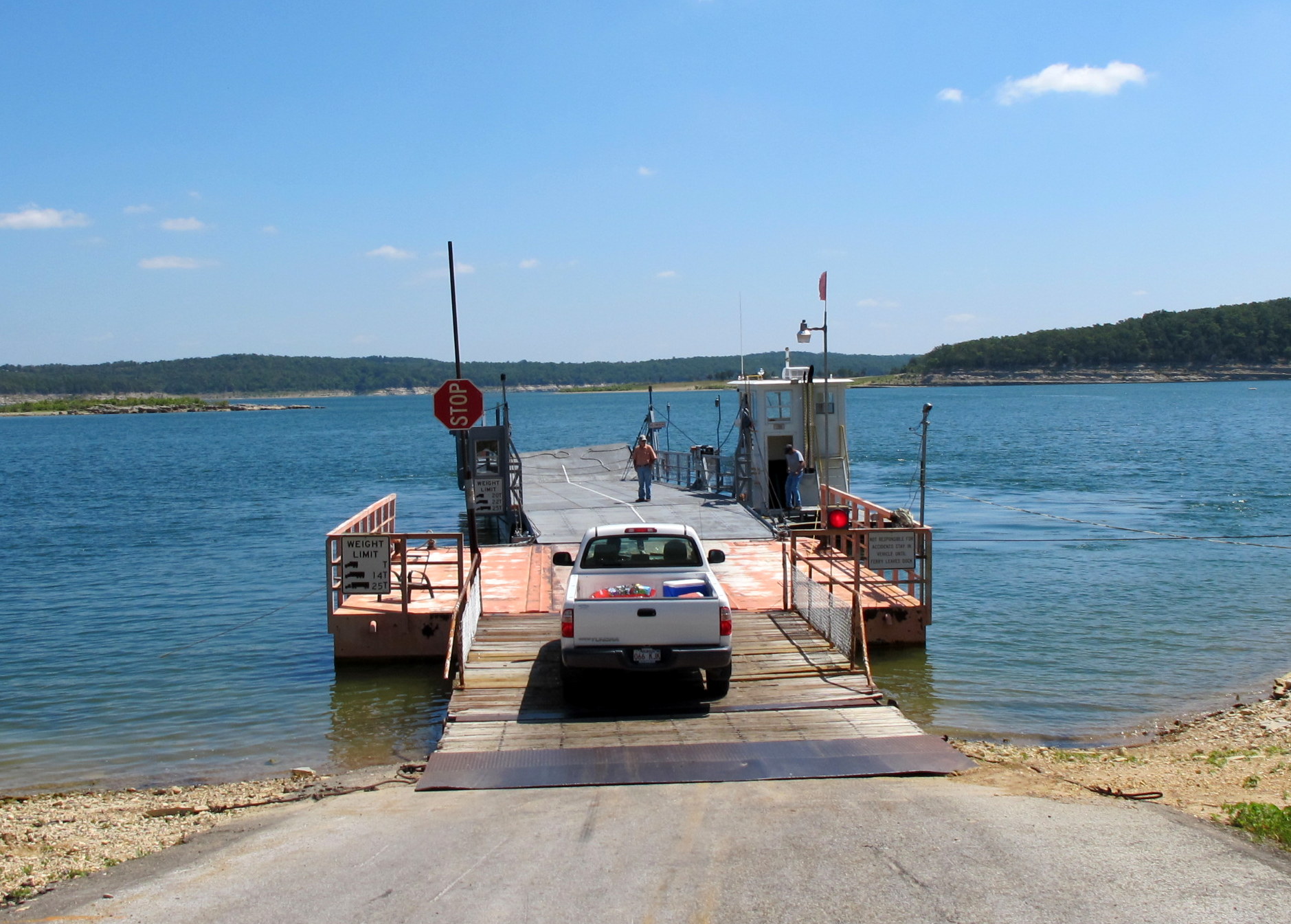 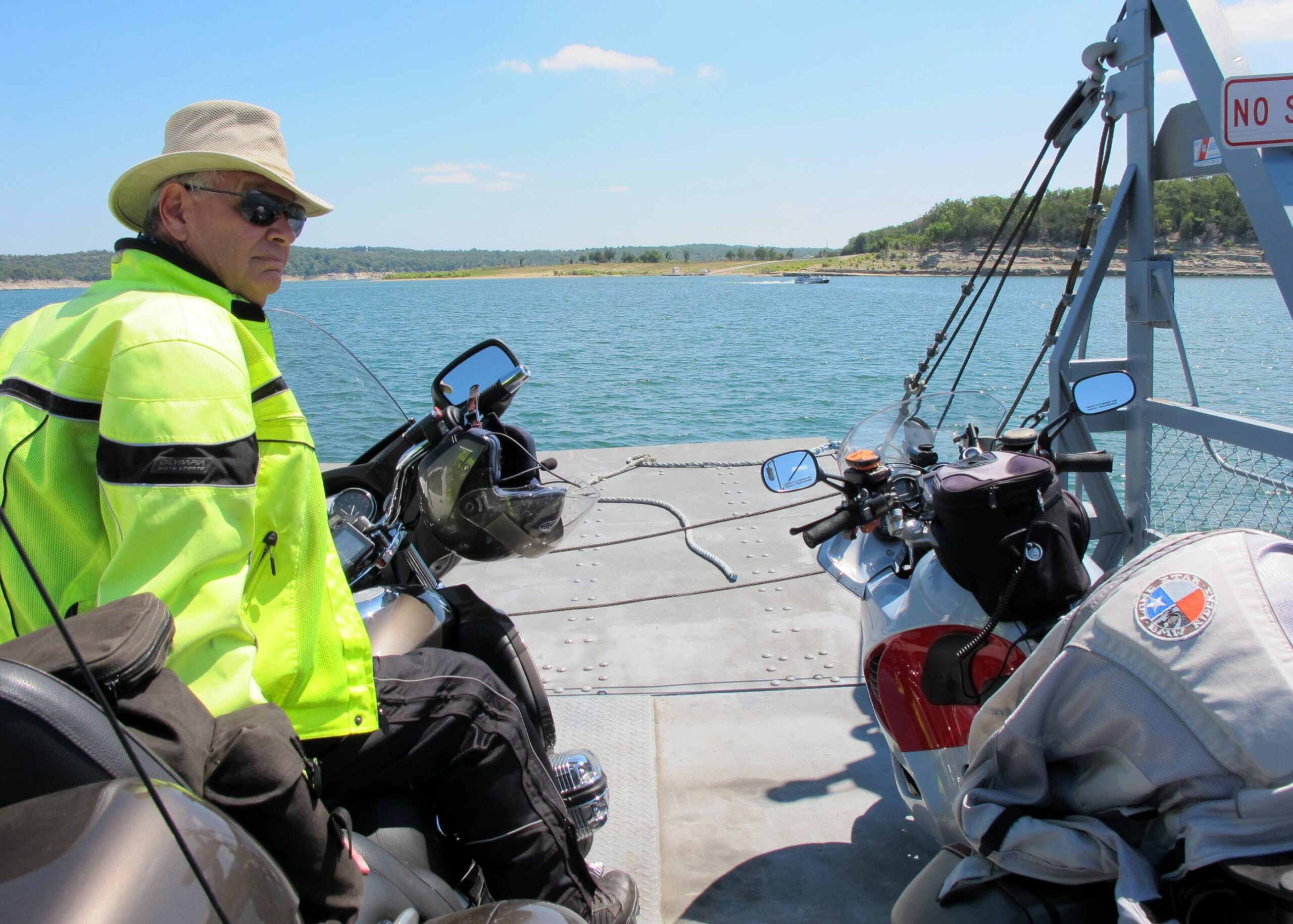 Peel Ferry was the major destination of the day.  Arriving at the loading area was encouraging.  I could see the ferry on the opposite side of the lake starting to move, and there was only one truck in front of us.  Charlie handed me another icy Gatorade, and we stretched our legs for a short time.  The ferry loading went quickly, with the majority of vehicles being motos.  The ride across the lake was smooth, and the skill of the ferry workers was very apparent. 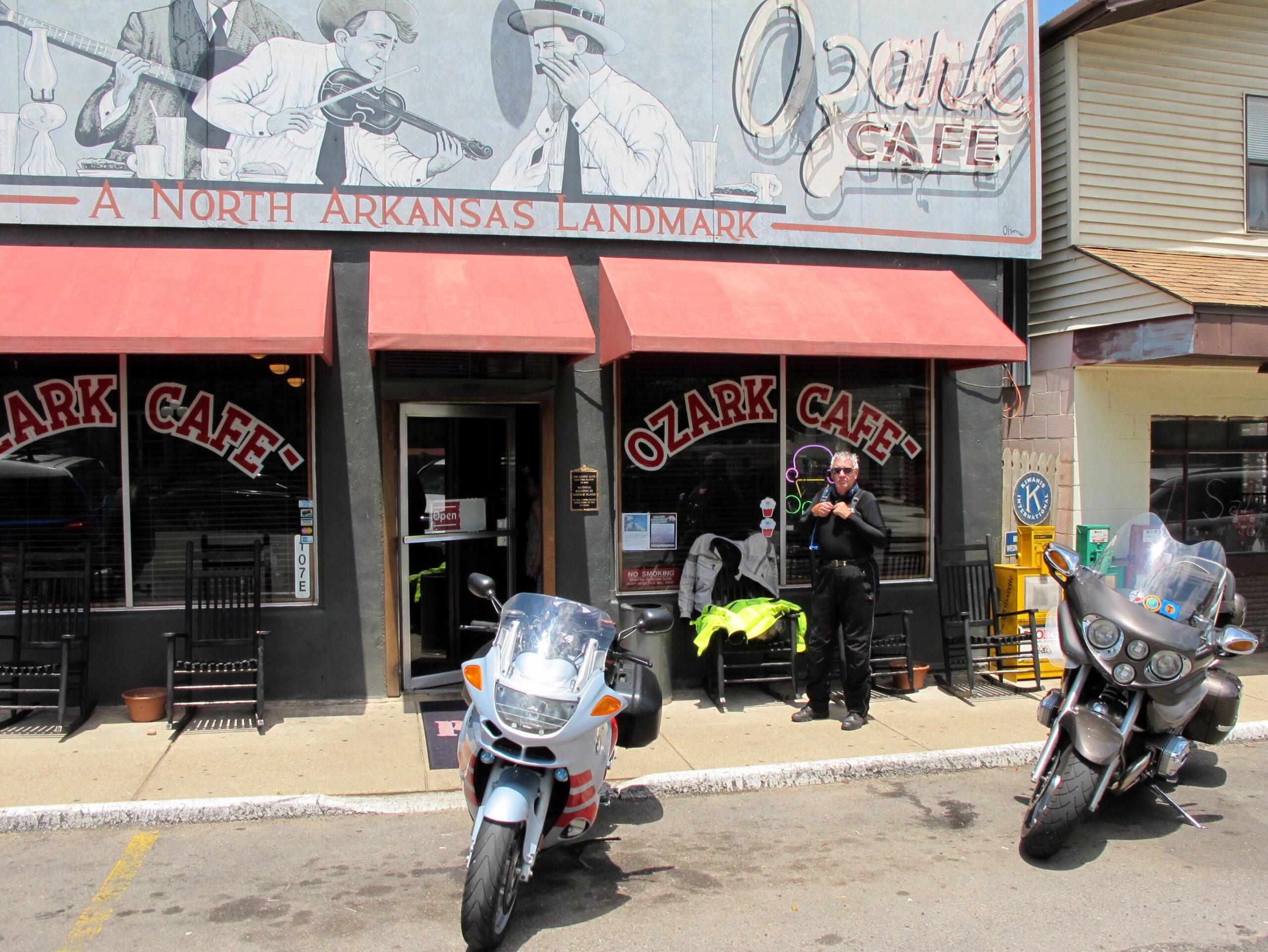 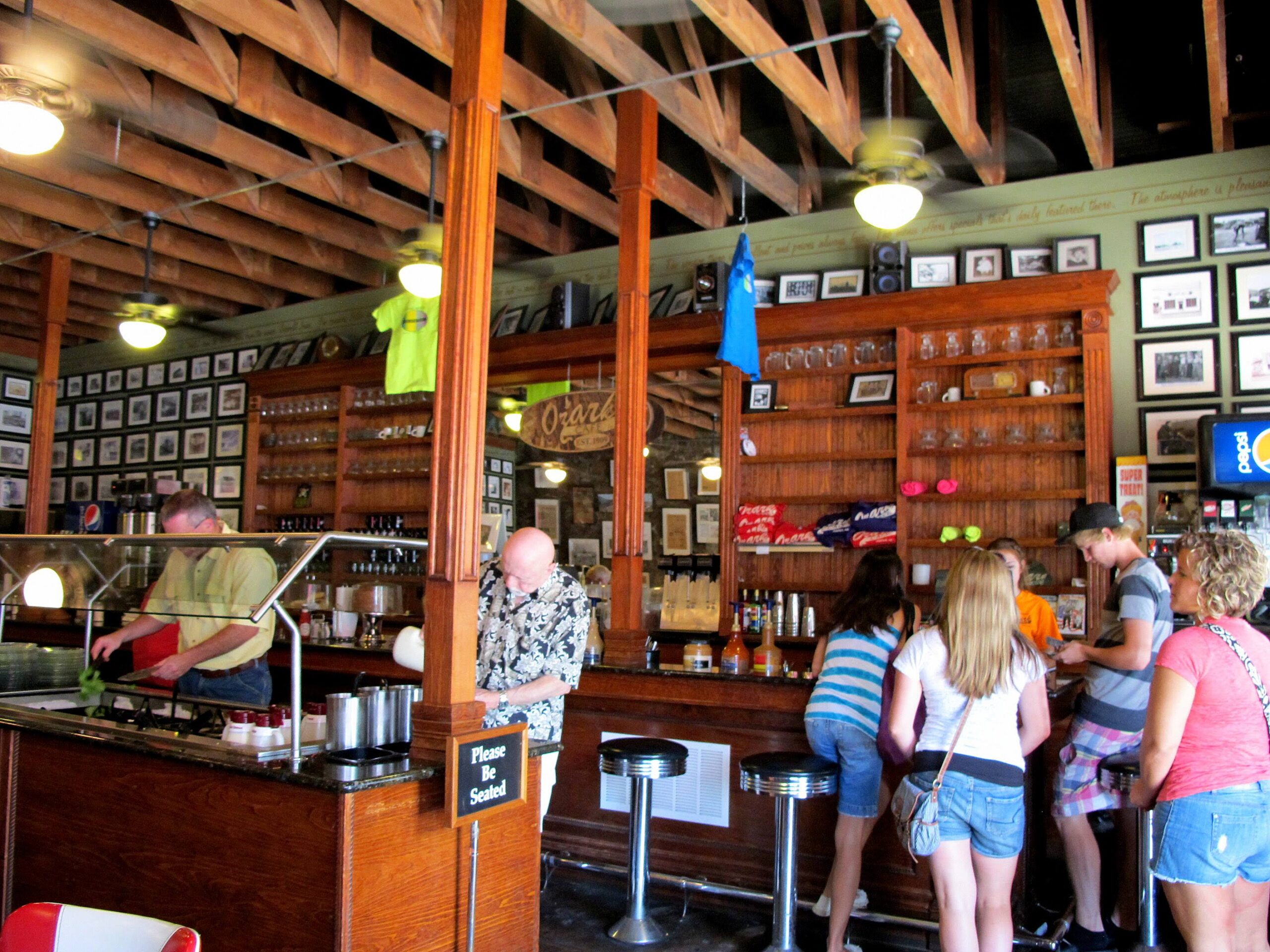 We rode south from Peel to Jasper and stopped at the Ozark Cafe for lunch.  Afterwards, more twisty roads were enjoyed on the way to Eureka Springs to meet the rally-goers from the Lone Star BMW Riders.

It was good to get out of the heat of the afternoon at the Edelweiss.  But strangely enough, we got cold drinks and sat back outside in the heat talking with club members around the bikes.  We tracked the progress of Bo via SPOT as he made his way south from Sedalia. 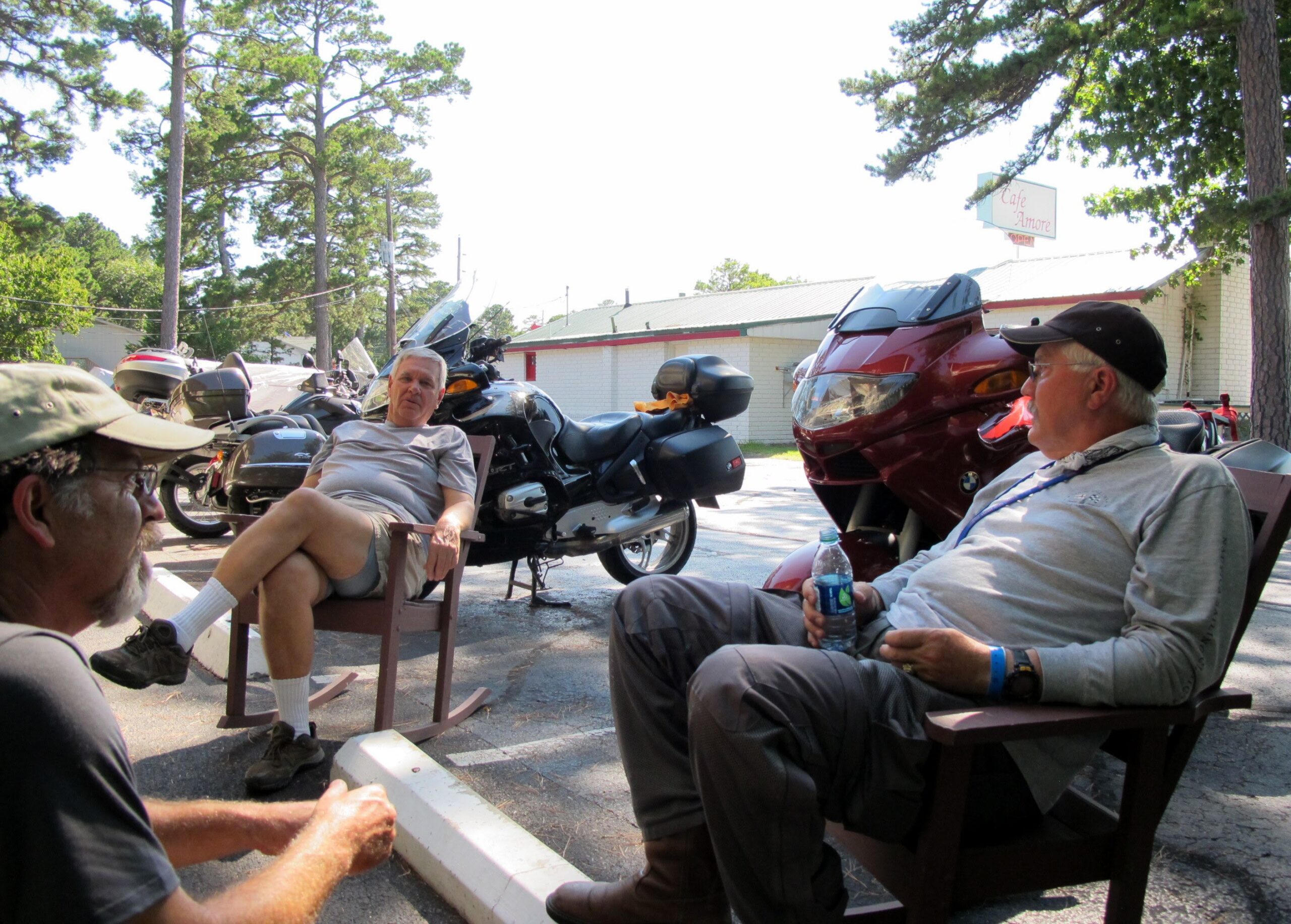 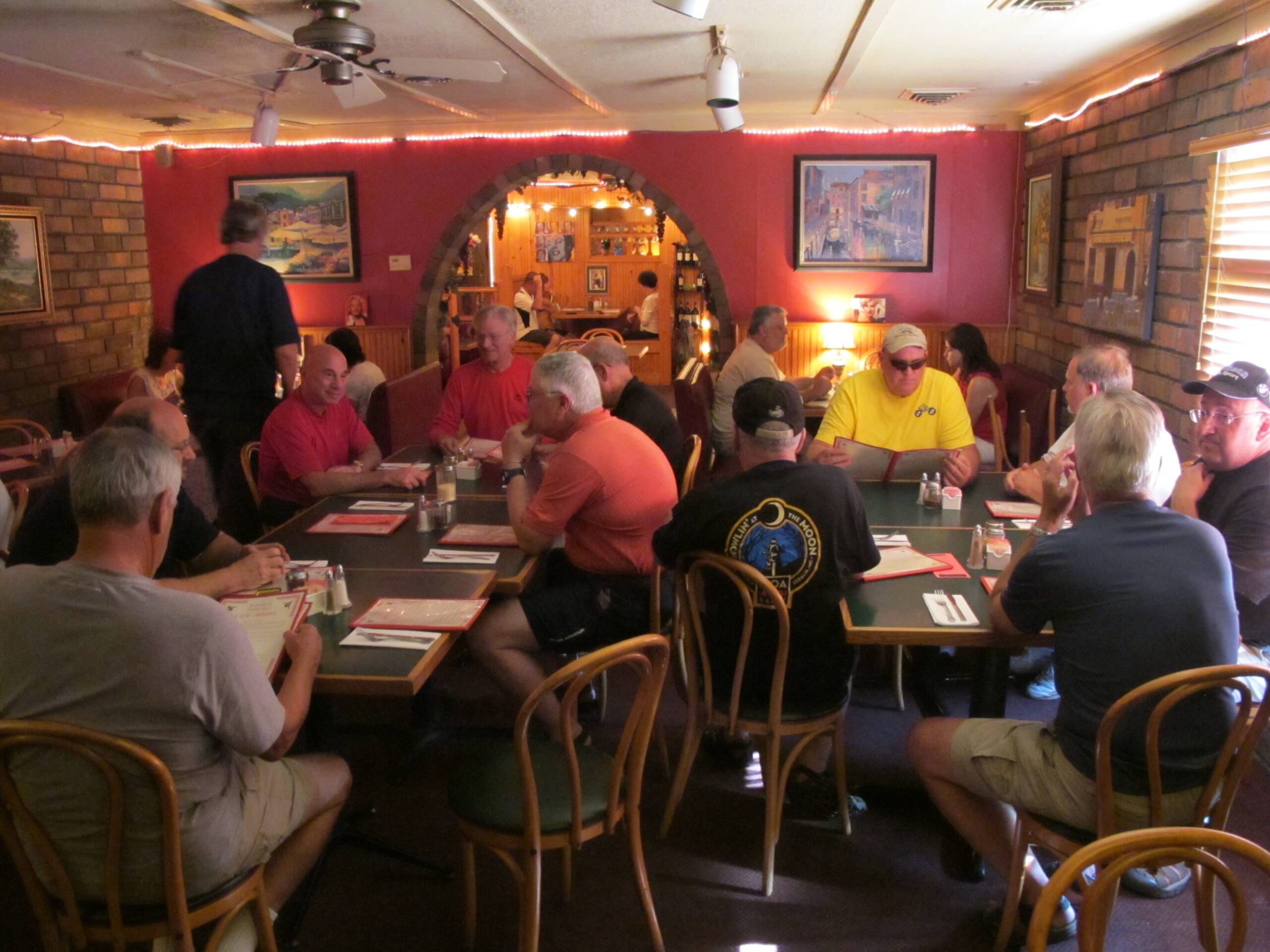 Dinner was just across the parking lot at Cafe Amore.  They had nice italian food and tasty merlot.  It was a nice way to wind down the evening and weekend. 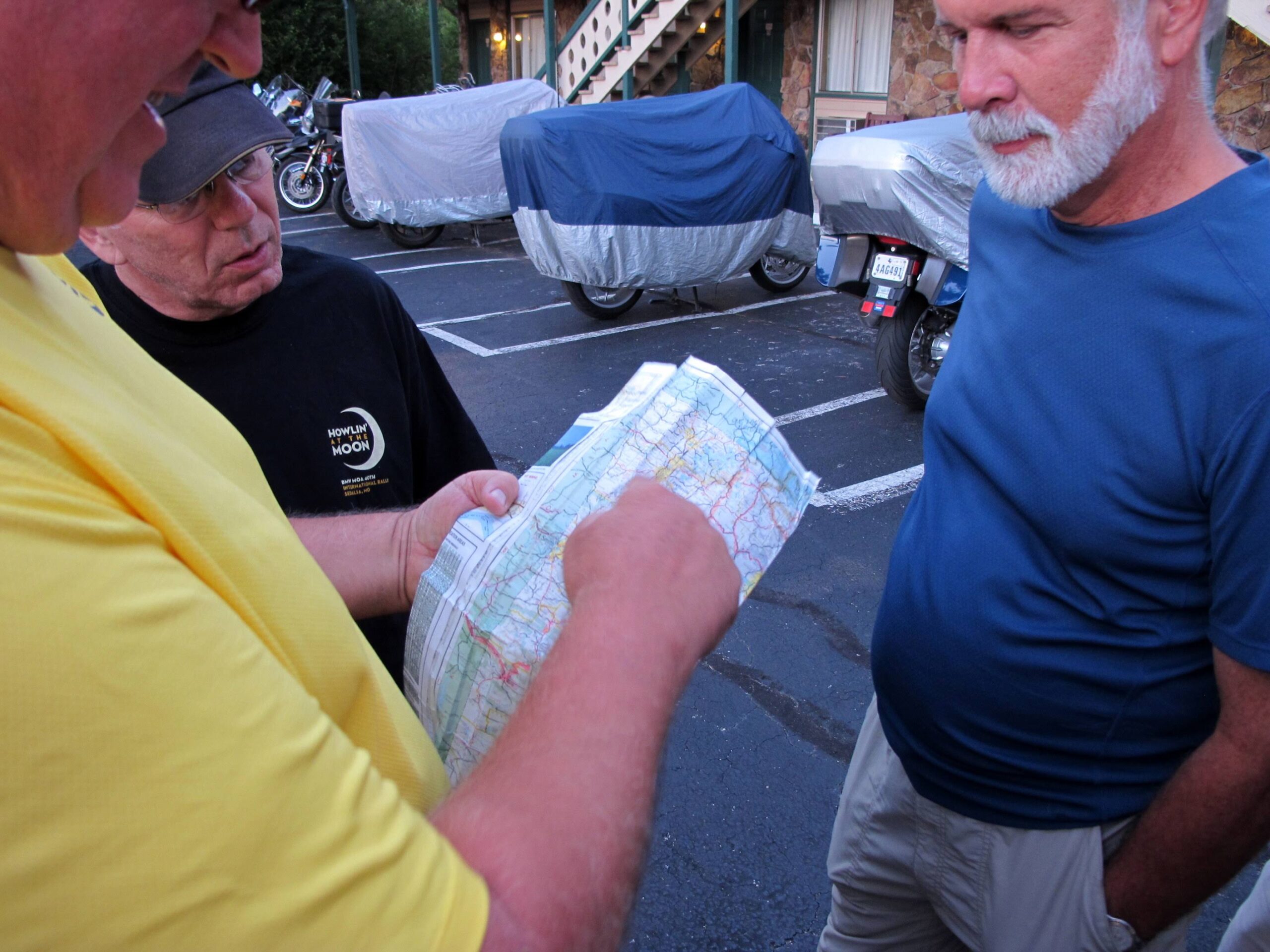 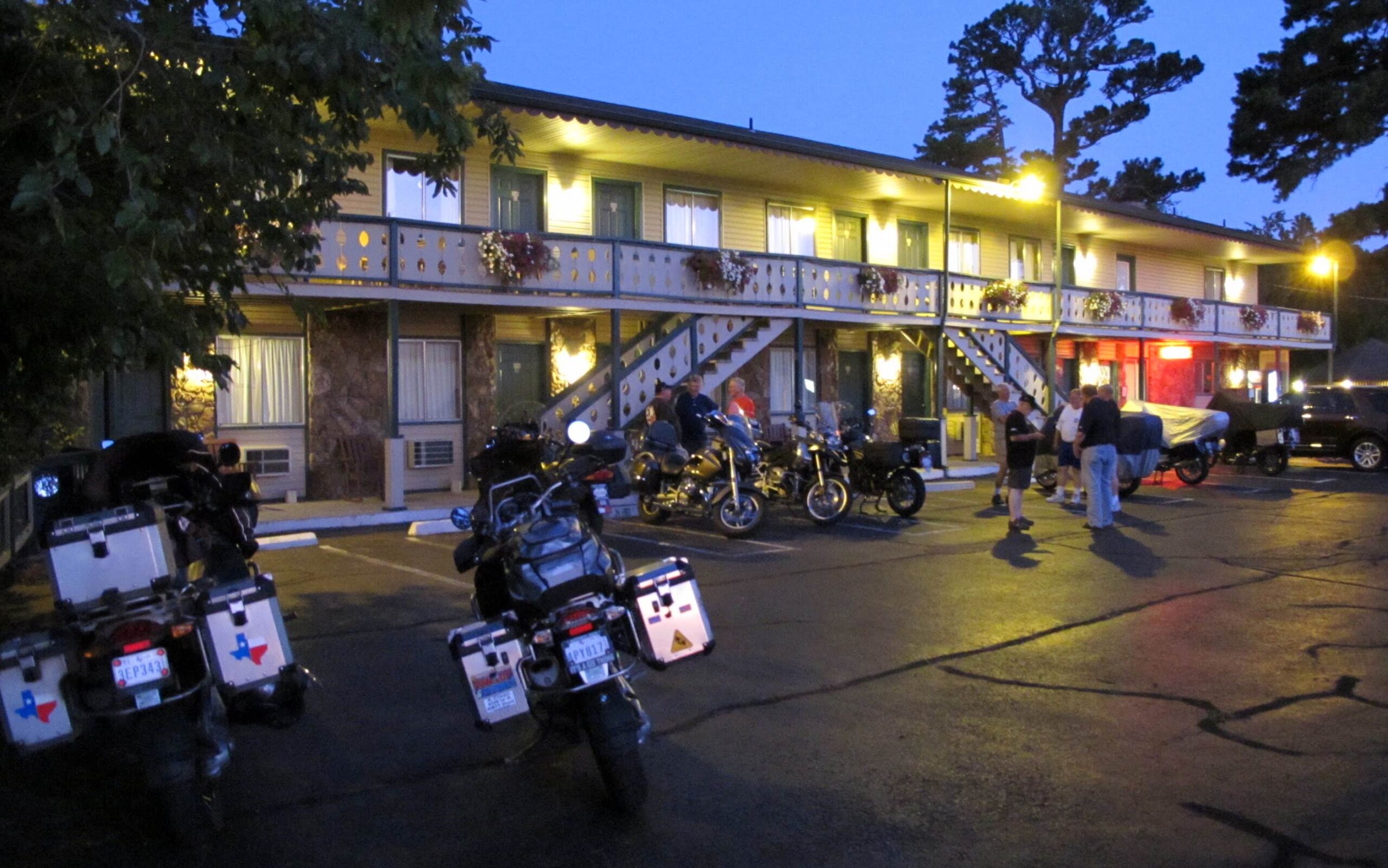 Afterwards, everyone was plotting a return ride route home, and figuring out how early to start to try to avoid the heat as much as possible. 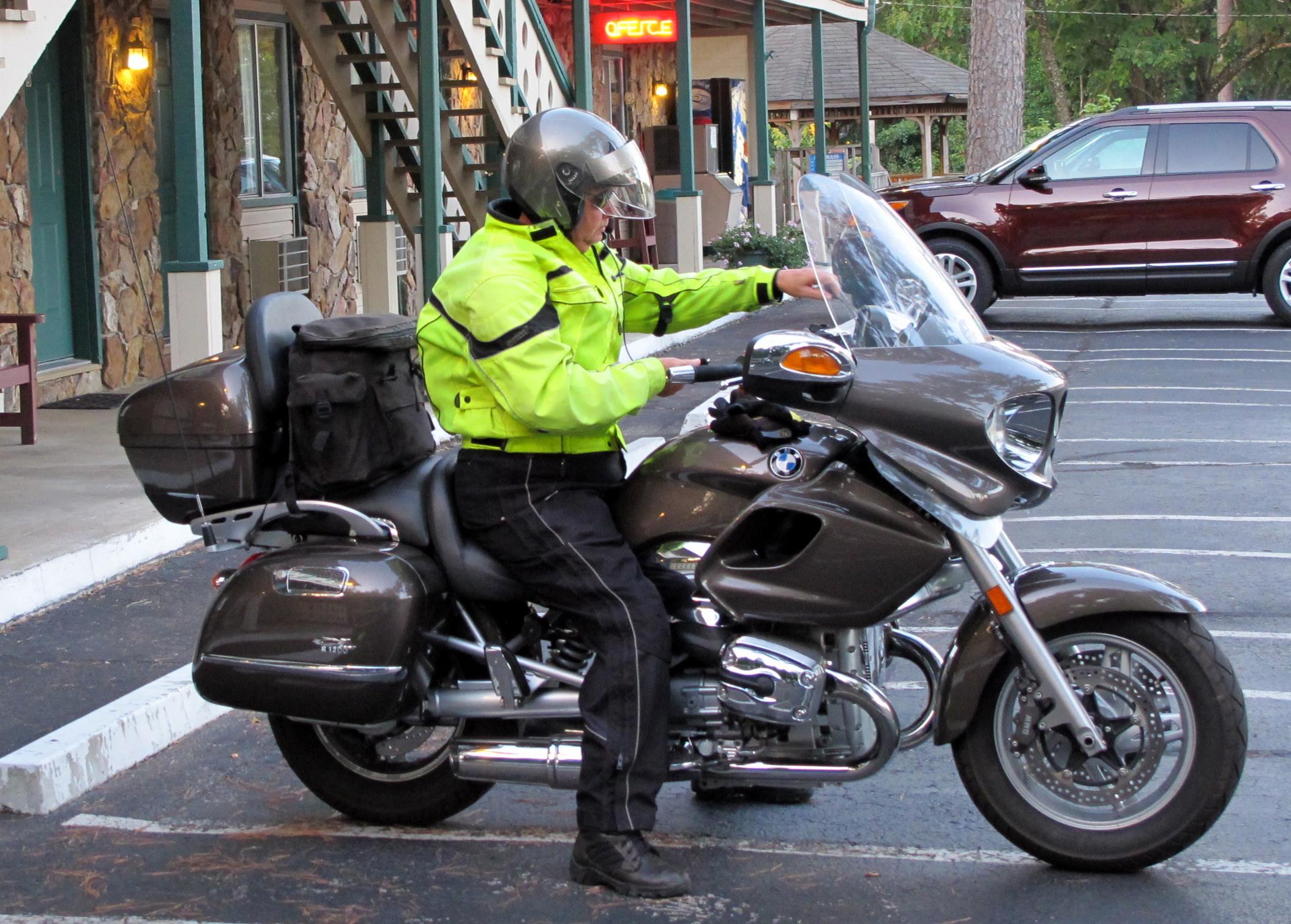 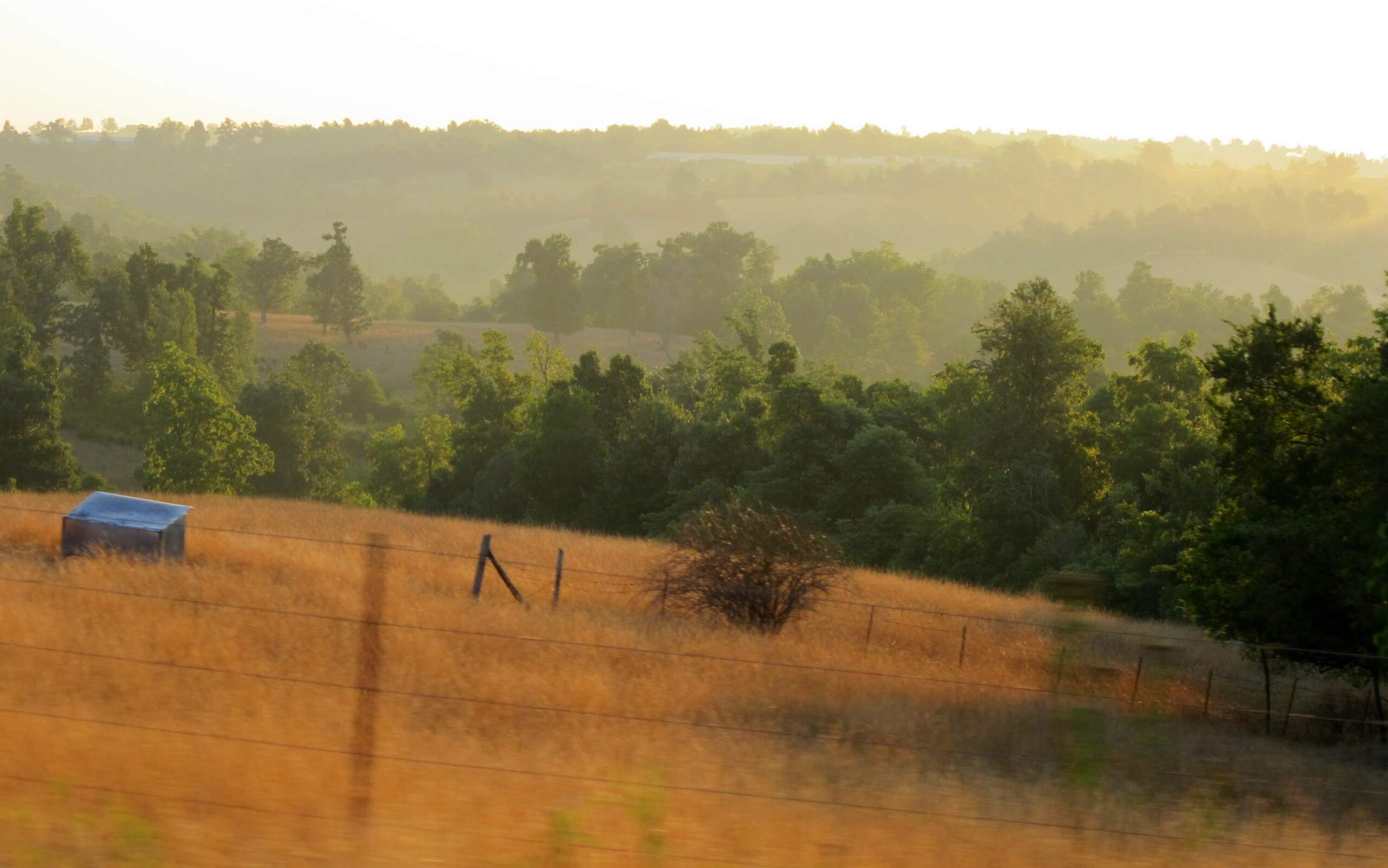 Charlie and I decided to ride at 6:30, after coffee at the Inn.  What we did not quite comprehend was the 7:30 coffee time.  So, after that disappointment, we rode south on Hwy 23 in the soft light of the morning, commenting to each other on the radios that it was actually chilly.  We kept the speeds low watching for deer in the morning light. 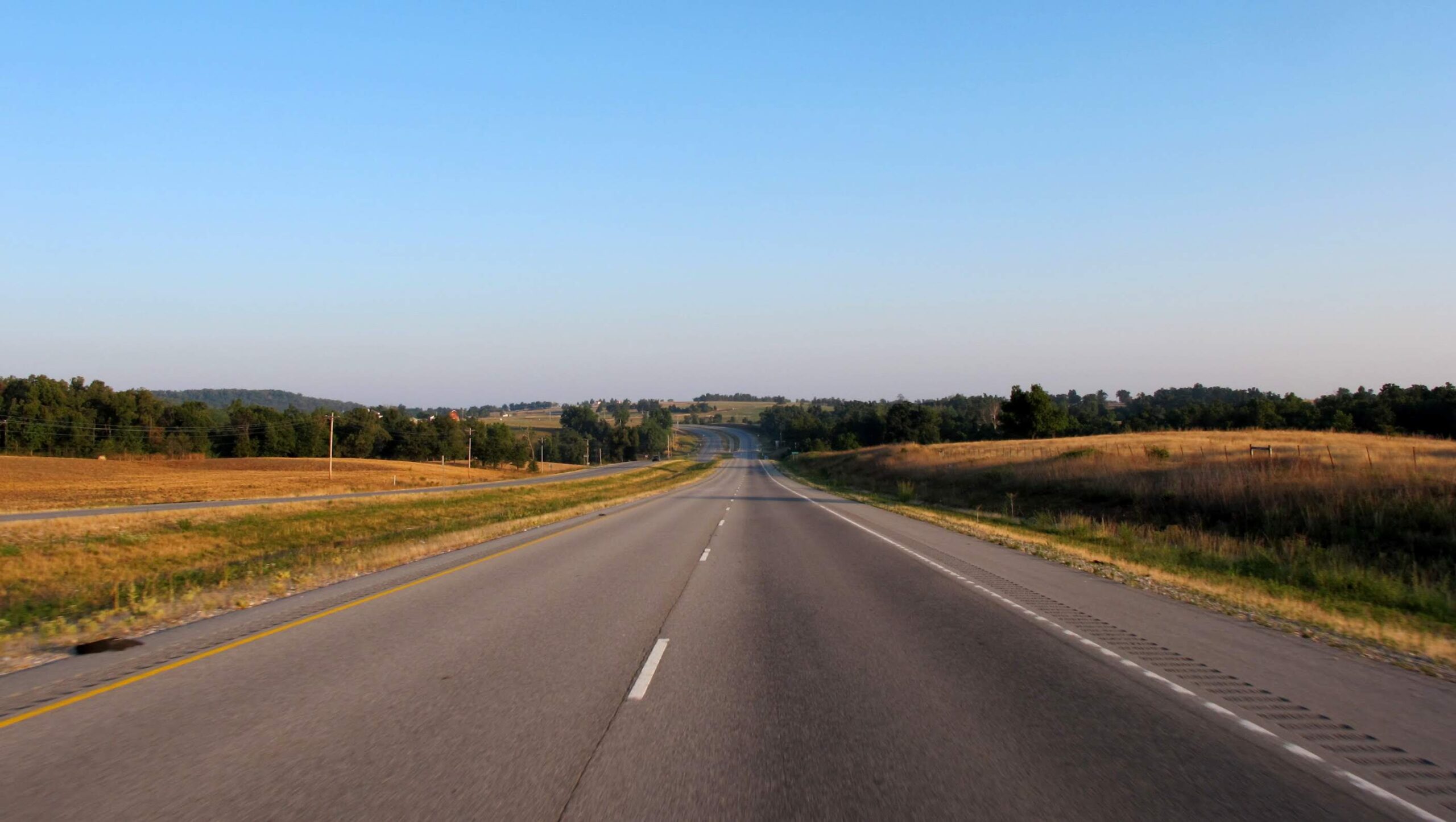 Those comments about chilly temperatures did not last long.  Once we rode through Springdale, the temperature steadily rose through the day.  We followed Hwy 412 and turned south on the scenic and winding Hwy 10.  After leaving Tenkiller lake, it was superslab for a couple of hours.

We stopped for fuel in Atoka, and as I was rolling my bike up to the store, Charlie came around some cars and asked me if I knew CPR, as there was a woman laying on the pavement.  I walked over to her, and she appeared to be having a seizure.  But, if one is to choose a place for a seizure, having one while a scout troop is taking a break is a good idea.  Some of the scout leaders placed blankets under her to get her off of the hot pavement.  We rolled her on her side, and I held her head to keep her still as possible while the EMT’s were arriving.  They took care of her, and she seemed to be coming around. 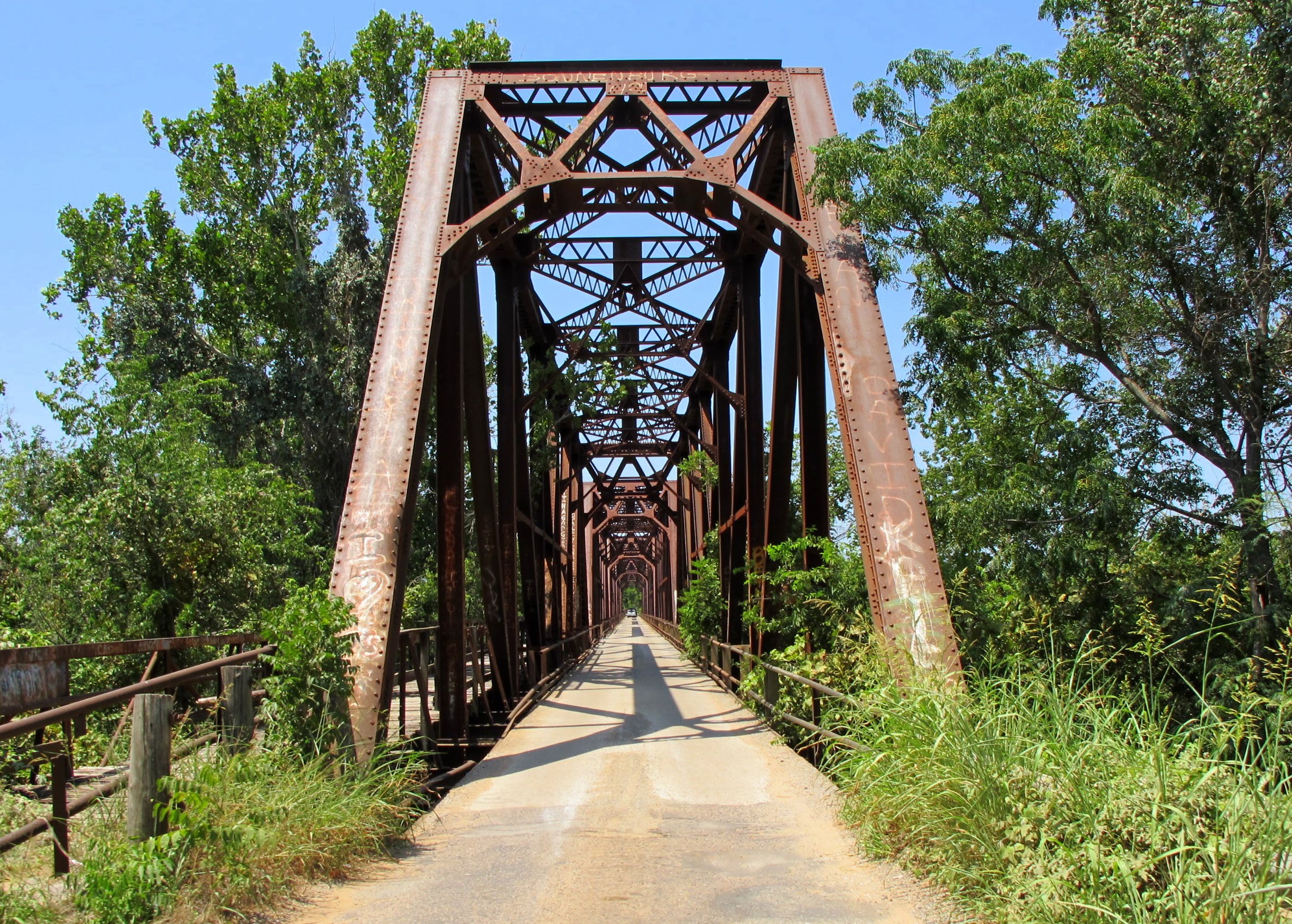 After that bit of excitement, we mounted the motos again and headed down the hot slab again.  I parted ways from Charlie at Durant to head straight south home across Carpenters Bluff trestle bridge.  It was a great weekend of riding even with the heat. 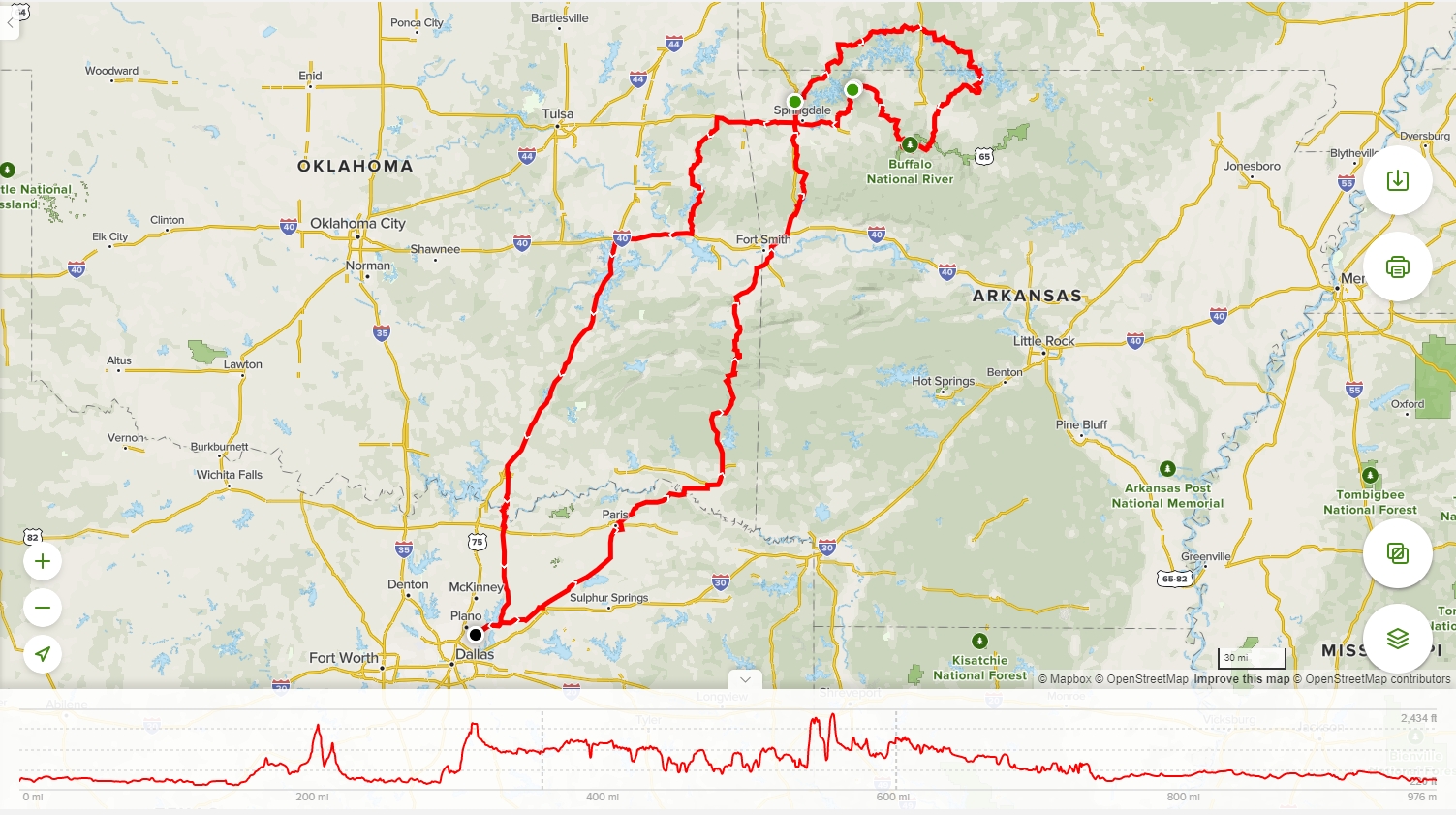