When I began the 2015 Big Money Rally on January 1st, my goal was to collect the 144 points in order to achieve finisher status.  I had no idea I would become consumed in the event and ride 7,800 miles to eventually place amongst the top 10.

Rally Master Reno John Austin along with the help of other riders put together an enticing mix of bonus locations and other moto bait that kept my interest piqued on a daily basis for the 5 months the event ran.

The rally entrants consisted of around 140 riders from all around the country ranging from Iron Butt Association veterans to weekend riders.

The themes of the rally were varied from geo-positioned locations across the nation that required matching my own photo with a sample image to word matches that could be obtained locally or quite often only at the original location.  Rallies within the rally focused effort to snag available points during those periods.  An example of this was the Leonard Nimoy theme orchestrated shortly after his death where two word matches per hour for a full day netted quite a few points.

The Word of the Day absolutely drove my wife nuts.  Some days it took just a few miles and others near a hundred miles of riding to claim the bonus points.

I did not realize how many ways BBQ can be spelled.

I never really paid attention to the length of town names, and the fact that BMR-required zip codes are not on all post offices.

Advanced planning was important for the image-matching requirements for Frickin’ Places, Movie Locations and County Courthouses.  The old service station in the photos above was used as a location in the film “Rain Man“.

And then there’s the poaching…  One rider either locally or across the nation identifies a word match or some way to obtain a bonus and others follow.  It’s all in good spirit.  This rally just gave another reason to ride.

The BMR scoring web site was a social hangout for riders across the nation to watch what others were experiencing and comment on bonus location photos.

I have met riders both virtually on the web site and in person at the ride to eat events in Dallas, Allen and Lovely Celina.

The Celina RTE brought together long distance riders from across the nation to both get together and visit and claim BMR points good only for the 3 days over the weekend.  Some BMR riders did over 1,000 miles to hit three Celina’s across the country to come have lunch in Texas.  Riders like Paul Slaton, MoBob Bowman and Frans De Wet have been in the top three positions for months with way more miles ridden than me.  Paul Slaton is to compete in the 11-day Iron Butt Rally this summer.  I ran into Paul, Frans and his wife Betty at a Ride to Eat in Allen and later in Celina for one of the BMR RTE’s orchestrated by Paul Tong.
For my own journey in the BMR, I spent the end of December and early January researching local word matches and planning day and overnight rides to earn bonus points for those and frickin’ locations identified by John Frick.

I located temperature displays to collect unique values between 0 and 30 degrees, both Fahrenheit and Celsius.

I rode through colleges and universities in Texas, Louisiana, Arkansas and Oklahoma to claim bonus points.

I happened to pick one of the coldest and wettest winters in Texas to participate in the BMR.  Yes, I know it’s all relative.  Some riders in the northeast only have 4 or 5 good months of riding.  I should stop my complaining now.  But for Texas, this winter has been out of the norm with 6-inch snows and a lot of rain.  Sometimes we just close the whole state when the ice and snow arrives.

There were plenty of word matches that could be found in the Dallas/Fort Worth area.  I rode a couple of hundred miles for several weekends and never left the grueling city roads and freeways of the DFW metromess.

At the end of January, I ventured out on a nice sunny day out through Sulphur Springs and up into Oklahoma to snag bonuses of courthouses, word matches at their original locations and Frickin’ Places.

By February, I was exhausting local word matches and ready for a longer ride.  With the colder weather north of Texas, I planned a ride through East Texas down to Freeport on the Gulf Coast. The colleges and universities had a high point values, but there were only a few scattered though Texas.  I rode east in early February through Tyler and Nacodoches to grab those points and other unique word matches along the way down to the relatively cold Texas beaches east of Houston.  One thing I enjoy through rally participation is how the bonus locations will take me to places I never considered to visit.  I never knew there was a Crocodile Encounters place in Texas.  I stayed in the petroleum town of Freeport overnight having dinner at the … amongst the regulars still in their refinery jumpsuits.  I arose early and rode out of town with the sunrise behind me following the mouth of the Brazos River.  The return route weather for this trip was much more pleasant than the ride down that stayed in the thirty’s most of the day.

I returned up into Oklahoma in March to do a day trip from home through Vernon and up to …. on Route 66.  I captured evidence of Americana along the way.  The weather was lovely for this ride with crisp temperatures and sunny skies all day long.  My last bonus for the evening was Murray State College.  I was having difficulty positioning my bike in a parking lot and still seeing it along with the campus sign and my placard.  This caught the attention of campus security who pulled up along my moto with its motor running and lights on.  I explained to her what I was trying to do, and she said just ride out there on the sidewalk to a monument closer to the campus sign.  She was cool.

Leonard Nimoy passed away on 2/27/15.  The BMR team celebrated his life with a 24-hour rally on his birthday, March 26.  There were 2 Star Trek-related word matches per hour starting at midnight Thursday.  I took off work to participate in this event grabbing a few hours of sleep Wednesday and arising at 12:30 AM to position myself in downtown Dallas for the 2:00 AM local time start.  I found a good majority of matches within the Dallas and Garland area and was able to return to my house for some rest and continued searching for matches.  It was interesting riding all around my large city at all hours in absolutely no traffic to frustrating rush-hour conditions.

In April, I decided to do a two-day ride into Louisiana and touching Mississippi to follow the big river.  Severe weather hit Texas the morning of my planned departure.  The forecast was not looking much better for the next couple of days.  I decided to ride a reverse route away from the weather for a single day down towards Toledo Bend and over to Natchitoches.  I was bummed that I would not be following the Mississippi River as planned, but the forecast of continued tornadic weather ruled.  I kept in touch with Debbie at home who told me that weather on my planned return route was severe for the evening.   I decided rather than arriving at home at midnight in bad weather I would stay overnight in Natchitoches.

The music and food was enjoyably Louisiana.  As I ate, I looked over my original route which would have taken me past the Midway Cemetery where Peter Fonda, Jack Nicholson and Dustin Hoffman contemplated life in Easy Rider.  I was looking forward to seeing this movie location, but had dropped it after the weather messed with my original plans.  Right before I left for the night, I pivoted around on my bar stool and behind me was a painting of them on the wall.  I posted this on the BMR site asking if it was an omen for me to go ahead and visit the site.

I awoke in the morning and looked at the radar for my planned return route, which looked like crap again.  After picking new BMR bonus locations south of me, I headed to the Louisiana Gulf Coast and west through Sabine Pass at the border.  I did so little advance planning for this ride that a ferry crossing at Cameron took me by surprise.  And I indeed get the chance to stop by Midway Cemetery for that bonus location, which I kept very short with hundreds of mosquitoes interested in me.  After seeing an eight-foot alligator road kill, I tuned into watching the canals I was riding by and saw eyes peering at me from the water several times.  By the time I was riding north from the Texas coast, the clouds thickened and I was watching again for bad weather.  Debbie messaged me again and said tornados were in the Dallas area again.  I looked at the radar and saw a dangerous line I would have to go through in the dark.  Once again, I decided to take the cautious choice of motel refuge.  I found the clean and quaint Relax Inn motor lodge in Kuntze to stay overnight.  I slept well.  The return ride home was low-pressure through back roads of Texas.  It was an eventful day ride turned several days, and elevated me into 5th place where Brian Ramsden eventually unseated me.

May had me focused on the Word of the Day where I would ride a couple of miles up to 60 or so to obtain points.  I did manage to do a day ride into Lousiana on May 19 to say goodbye to the 2015 Big Money Rally.  Had we not already made plans to visit our good friends Troy and Susan in Seattle, I would have ridden out to Nevada for the BMR banquet on May 23rd.  I was there in spirit watching the final accumulation of points by obsessed riders making their way to visit other obsessed riders that should really all be in group therapy including me.
Many thanks goes to rally master John Austin and the others that helped find bonus locations and helped with scoring.  The rally web site was well-designed and very stable.  Scoring of submissions was relatively fast and sometimes so fast I was trying to figure out if a robotic application was in place.  The mobile phone application built by the resident rally geek was a great help since it incorporated the Daily Identification Code in the photo simplifying documentation.  Thanks again all! 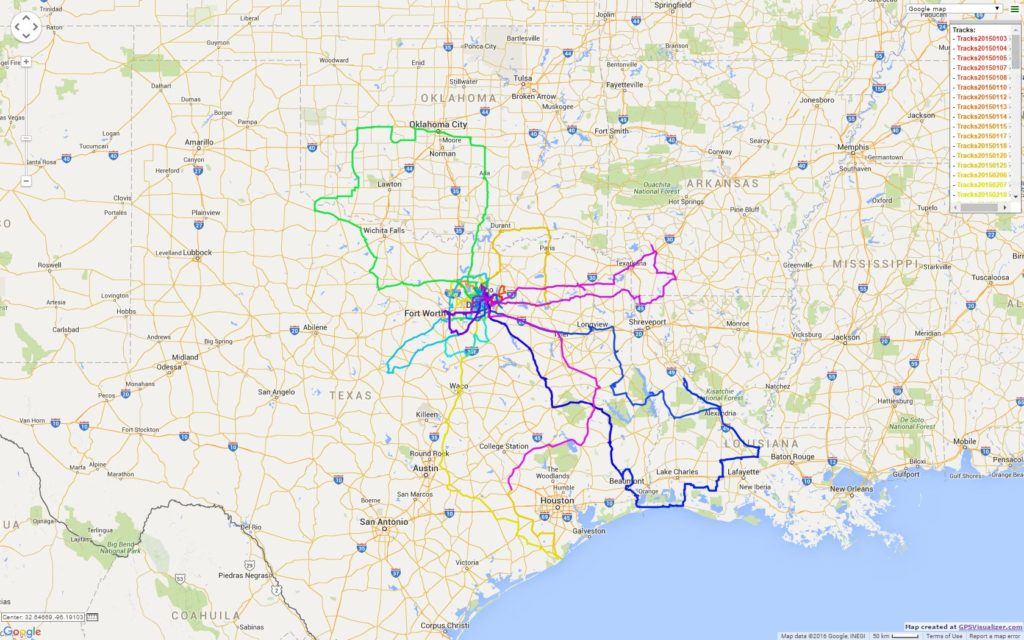