Keith offered up an invite to stay at his place near Zilker Park in Austin and to make a ride out to Ski Shores the next morning for a vintage bike show hosted by the Austin Roadrunners.  I took the bait and was ready to get out of Dallas for a short time.

Deb and I wrapped up some things Saturday morning, and I was on the bike around 1:00.  The temperature was in the high 90’s with our early summer-like heat, so I tried riding with shorts under my mesh overpants.  Interstate 35 between Dallas and Austin is like a 200-mile long freeway in a big city, so finding another route on the two-lane roads is much more enjoyable, even if it takes more time.  The chosen route down to Austin took me across Lake Whitney, Gatesville (lots of prisons) and west of Fort Hood through some entertaining roads.

Once in Austin, we went out for dinner and brews at a local eatery, Kerbey Lane Cafe.  Good food and interesting wait staff.  We made our way back to Keith’s place and attempted to get in the top 10 finishers in Xbox Moto GP.  Thank goodness I don’t ride and crash my bike the way I do in the game.

Sunday morning Lily was not too thrilled about an early rise (9:00???), so Keith and I went out for breakfast at Kerbey and came back later for Lily.  We put on the road armor, and did a leisurely ride out through west Austin and to Lake Austin through some twisty roads.  A coyote passed in front of Keith and Lily at one point near the lake.

The bike show was fun (and hot), with just as many interesting motorcycles in the parking area as the show itself.

It was yet another good trip with around 500 miles clocked. 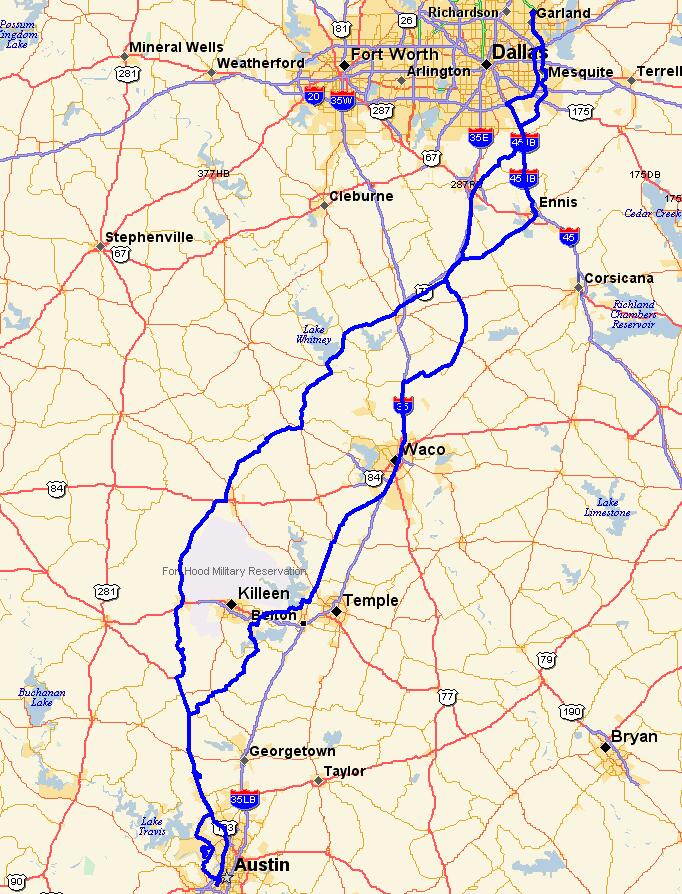