This is Sipapu rally weekend, the Bavarian Mountain Weekend, hosted by the Albuquerque Land of Enchantment BMW Riders.

I could not wait to get out of the metromess traffic after work and hit the lightly traveled highway 180 outside of Mineral Wells. It would be not be long until I had few worries of a cage running me down during their mindless commute.

I wound up in Abilene just a bit after dark. The bed felt good. I laid and envisioned the next several days and my transition to another spectrum of life.

The alarm sounded at 5:30, and I quickly realized that work was not on the agenda. So, there was no hesitation in getting out of bed and dressing for the ride. I rode in the predawn darkness and watched the sun rise in my mirrors. The light and warmth lifted me and started showing what little there was to look at in the flat West Texas Panhandle.

When I first planned this trip, I wanted to camp within Chaco Canyon National Historic Park. But the campground had been closed all summer for some repairs. So, I found that a former park employee, Matthew, was hosting campers on his property just north of the park boundary at Hwy 57 (Chaco57).

I had originally planned on staying at Fenton Lake State Park in the Jemez mountains, but I was making good time and changed my course to head straight to the Chaco region. I called Debbie in Cuba for what I thought to be the last chance of the day before I headed out to the barren western part of New Mexico. The road off of Hwy 550 was paved for around 8 miles, but turned to gravel, which I had expected. What I did not plan for was terrible washboard conditions that would appear without warning. Once they appeared, it was hard to scrub off speed so the bike was not completely shaken to parts. Crawling through these sections at under 10 mph was about the only solution, as there was no clear track anywhere on the road.

I did not get very good directions when I talked to Matthew earlier in the day, and all I remember was his property was on the way to the park. I stopped to take a picture of an arroyo that was quickly gathering water from the afternoon storms. A park worker stopped to check on me, and I asked if he knew where the camp was. It was a good thing that I had stopped at the wash, as he pointed up the hill to a really small trail that I would have never seen.

Once on the right trail, I followed the hand-lettered signs pointing the way to Matthew’s land. His place was out in the desert on a rise with a 360-degree view of the horizon.

I was greeted by the feline welcoming committee made up of a ginger male cat and a gray tabby female. They followed me all around the fence line as I watched and photographed the thunderstorms that were dancing all around on the distant horizon.

The rain hit the tent during the night and kept me from sleeping very soundly due to thoughts of previously mentioned clay roads turning to slick muck.

I quickly gathered my tent, sleeping bag and mattress and started packing them on the bike. The roads were only damp from the rain. It sounded worse than it was. I said goodbye to Matthew and thanked him for the pleasant stay on his little piece of the high desert.

I backtracked to the park entrance over some of the worst washboard roads that I have ever experienced. I think these roads may be intentionally left poorly maintained to minimize the visitors to the area, or maybe it is just a financial thing. Even with the bad roads, it was worth it. This is a place where I will return, and likely with Debbie so she can experience the remarkable dwellings that were put together 1,000 years ago.

I was given a quick orientation by the park staff, had a bit more munchies for breakfast, and then made my way slowly around the 9-mile loop. I stopped at a few ruin sites, but saved the most time for Pueblo Bonito at the end of the canyon. This group of dwellings and kivas is the most spectacular of the park, I was able to crawl through the small doorways to explore all that I could.

It was time to go and brave that damn road again to get back to the highway to head to Sipapu. It took an hour to travel the 21 miles. And I can’t say I enjoyed it very much since the road took extreme attention even at slow speed.

But, the pavement reappeared again, and I rode to the northeast on Hwy 96 around through Abiquiu. This is a very enjoyable ride with high speed sweepers and great scenery. The terrain varies from scrub to pines. I picked up the High Road to Taos, and the rain storms appeared on the slopes. The way the rain sweeps back and forth on the way to the forest is entrancing, which is not a good thing on a bike. So, I kept my eyes on the turns with occasional glances to make sure I did not have to don the heavy rain gear.

Once again, the rain chased me to the camp, but it turned out to be light, so no prob. I quickly searched out my favorite spot along beside the stream for my small tent, and found it unoccupied. The tent did not take long to set up, and I made sure the rain fly was in place before going up to the lodge tavern for a cool one to celebrate the end of the day’s ride.

There was a chili “snack” for dinner, and a jug band for entertainment. The evening was nice and cool, and a light rain fell during the night. The sounds of the stream masked out any other unimportant sounds, and I slept well, albeit a bit chilly. I’m bringing a liner for my 40-degree down bag next time.

Today’s ride would be low pressure, and the poker run instructions gave me some targets to find along the way around The Enchanted Circle.

I stopped at Zed’s in Angel Fire for a burger, and to document my passage through here for the bonus points for the poker run.

I came to a group of around 8 motos, all stopped and looking at the rushing water across the road. We sized it up and watched a couple of trucks go through. I picked a path to avoid the deep stuff and went on. The rain intensity picked up, the hail as well, and before I knew it, the whole road was covered in small hail and sleet. It was like riding on marbles. I followed a truck’s tire track to minimize the depth, but it was still sketchy.

The weather from this afternoon will not give up. The storm that I passed through earlier north of Mora came through the camp at Sipapu and drenched everything. We thought it was all over for the day, and now as the Great Blue Whales are playing an entertaining set below, the lightning is flashing again and the thunder getting louder and obviously closer. But, the tent stayed dry during the earlier storm, and I have shelter right now to relax and take in the music and spectacular weather. Tomorrow morning’s ride will be a chilly one to start, and hopefully will be a bit drier than tonight. It will be a long haul across Texas, and some work, but it’s on two wheels. So all’s good.

This has been a remarkable long weekend trip. The sights at Chaco Canyon and the thoughts of what went on there 1,000 years ago are hard to comprehend. The area around Taos is nice as always. The Albuquerque club does a great job in hosting the Bavarian Mountain Weekend. The bikes are interesting and the riders are all unique and fun to get to know. It’s a relaxing place and pace. 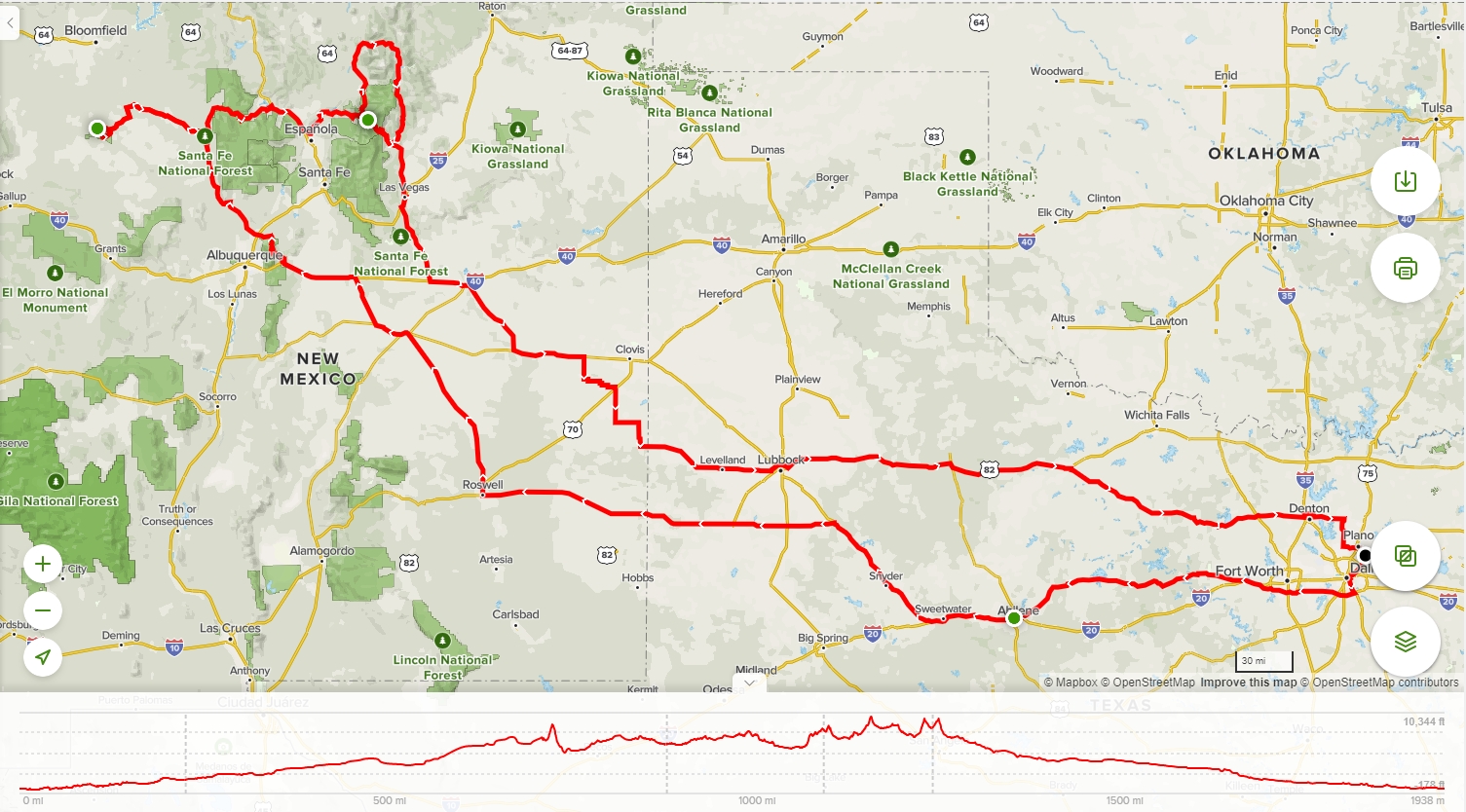