The Lone Star BMW Riders had around eight of our members riding to Paonia, CO for the Top of the Rockies rally hosted by the Colorado Beemers.  Alan and I would be riding together leaving Wednesday after work and meeting with the rest of the riders who had left Saturday wandering through Arizona and Utah.

Alan met me at Weatherford after work so we could get a jump on getting out of the Texas heat by riding to Snyder in the evening.  The cool temperatures left over from the afternoon showers were a surprise as we neared Snyder.  The ride was enjoyable and Elke was running very smoothly punching through the still evening air.

What looked like campfires on the horizon turned out to be the red lights of the wind turbines flashing and blinking with the turns of the blades. It was a strange site from 25 miles away.  We are staying at the Purple Sage Motel and Laundromat (no, I’m not making this up, Alan).  Tomorrow we head out early to make a meandering ride north of Ruidoso and around the back side of Sandia Peak to our next stop, Bernalillo.  It’s good to be on the road again.

We left the Purple Sage Motel in a semi-deluge of rain that sat on Snyder all night.  Drizzle and occasional rain stayed with us all the way to Roswell.  We found a great burrito place southwest of downtown Roswell called Burritos and More.  This place was doing tons of local business, and green chili steak and red chili chicken burritos were great and quickly prepared.

I told Alan the ride would get interesting and nice as soon as we headed out of Roswell towards Ruidoso.  We cut north through 380, and the gentle twists along the foothills were just what the doctor ordered.  We took back roads (Hwy 55) towards Albuquerque and wound up on the east side of Sandia Peak.

Remember the interesting part I told Alan about?  What transpired next was not in the original route plan.  I missed the Sandia Crest road and turned on the next that the GPS was indicating.  I did not notice we had missed the planned road until we were way down La Madera Road, which started out as a twisty, interesting mountain road, and then went to gravel.

I was semi-expecting my original route to have a short stretch of gravel,but this road went to goat trail variety very quickly.  As we were making our way down a rutted section, Alan hit a rock which launched up into his oil filter, spilling the crankcase and setting off his warning lamps.  I walked back up the hill and we crawled under the bike to figure out the best plan of action.

We called the Albuquerque dealer, but they were closed as we expected.  So, the next stop was the BMWMOA Anonymous book to look for a rider close by.  The first call to Jack in Sandia Park was the jackpot, so to speak.  Jack rides a R1200GS, and he had a filter.  I left Alan alone with his bike and bobcats and bears and rode another rough road to Jack’s house up in the hills.  He gave me tools to remove the filter as well.  I returned back south on the highway to pick up oil, and did La Madera on through the gravel goat trail back to Alan.  After a return to Jack’s house to return tools, we rode south in the dark through Albuquerque along Tramway Road along the twinkling lights of the city and up to Bernalillo for our night’s stay.  What an ADV day…

The roads were wide and good towards Farmington – quite a contrast to yesterday.  We stopped at Blake’s for lunch, which was required as part of a recommendation by Jerry.

Alan knocked out more change approvals via the Blackberry both at Blake’s and out in the desert at Shiprock.  Oh boy, technology keeps us working even on a ride.  Woo hoo…, something’s wrong here…

We stopped briefly for fuel and a cold drink in Cortez, CO.  We turned onto Hwy 145 and headed up the canyon.  The vegetation quickly changed from desert scrub to green trees and pastures.  As the altitude rose, the temperatures dropped and the scenery just became postcard material at every turn.

The Telluride area was beautiful, with green fields and trees, and rugged mountains rising in the background.

The sun was getting low in the sky as we approached the Hotchkiss/Paonia area. At the rally site, we met up with Bob, Keith, Allan, Thomas and Tom and set our tents up next to their camp.

Arizona Al Schibi made me a set of molded ear plugs with acoustic tubes connecting to the audio transducers below.  What a difference that made on the road with quality sound piped right in through the plugs instead of having to drive my helmet speakers at 100% off of my XM satellite receiver to get through my ear plugs.

We had breakfast and headed off for a 270-mile loop around through Aspen, Independence Pass, Cottonwood Pass, Crested Butte and back to Paonia.

By the time we reached Crested Butte, we were ready for a pint and some relaxation up on Eldo’s deck.  The sun was shining, and the crowds below fun to watch.  We headed out towards Kebler Pass to return to Paonia, and wound up doing a 31 mile stretch of gravel road on CR-12, as if Alan had not already had enough GS for this trip.

Bridgekeeper: Stop. Who would cross the Bridge of Death must answer me these questions three, ere the other side he see.

This is my 4th time to go through Cuchara, and it is great each time I have visited.

When I was planning the route, I did not really think out how many mountain passes we would traverse over the course of the ride.  By the time we crested Raton Pass on the way home, we had done 10 of Colorado’s 53 major passes, and had done the two highest Colorado passes on paved and improved roads. 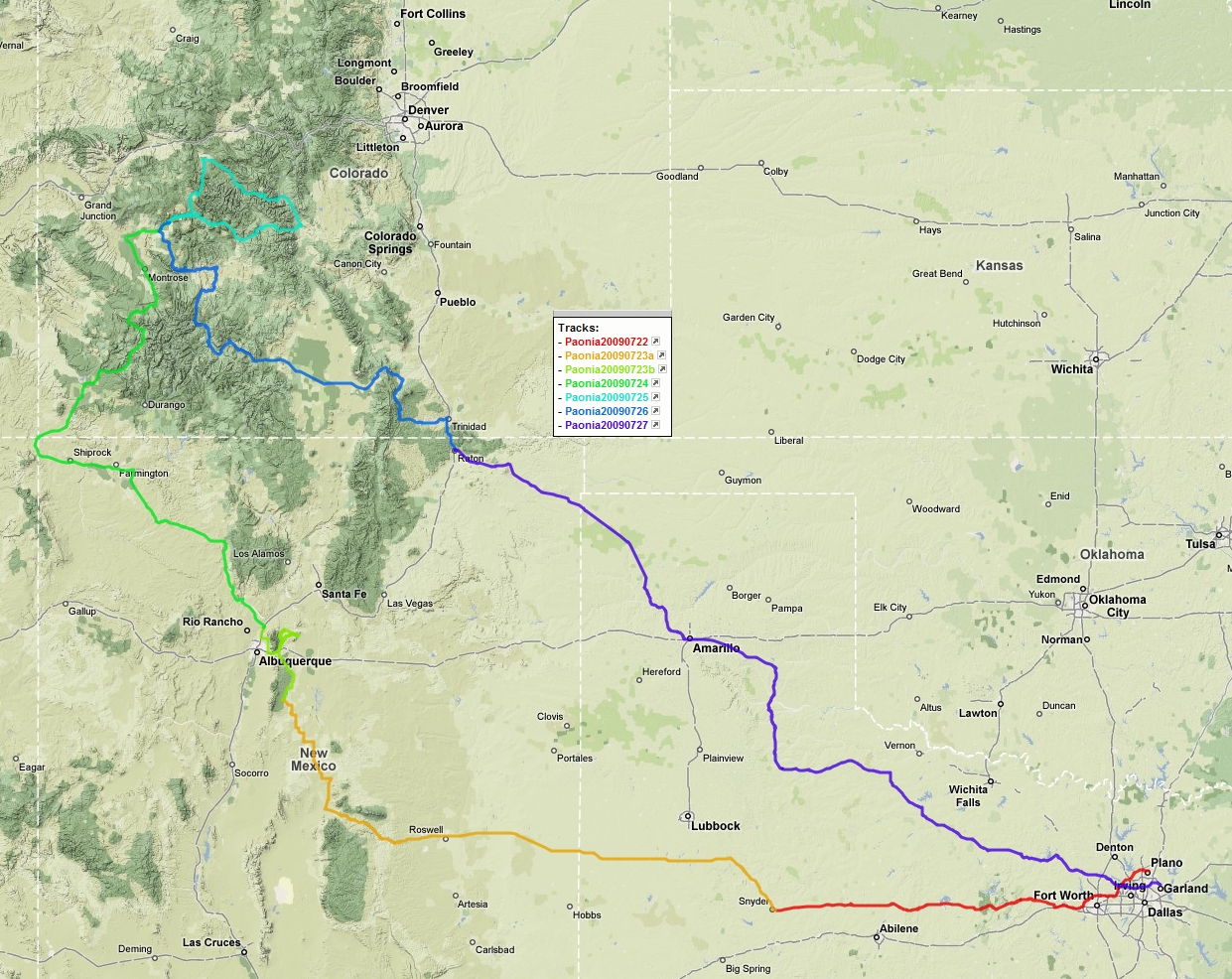 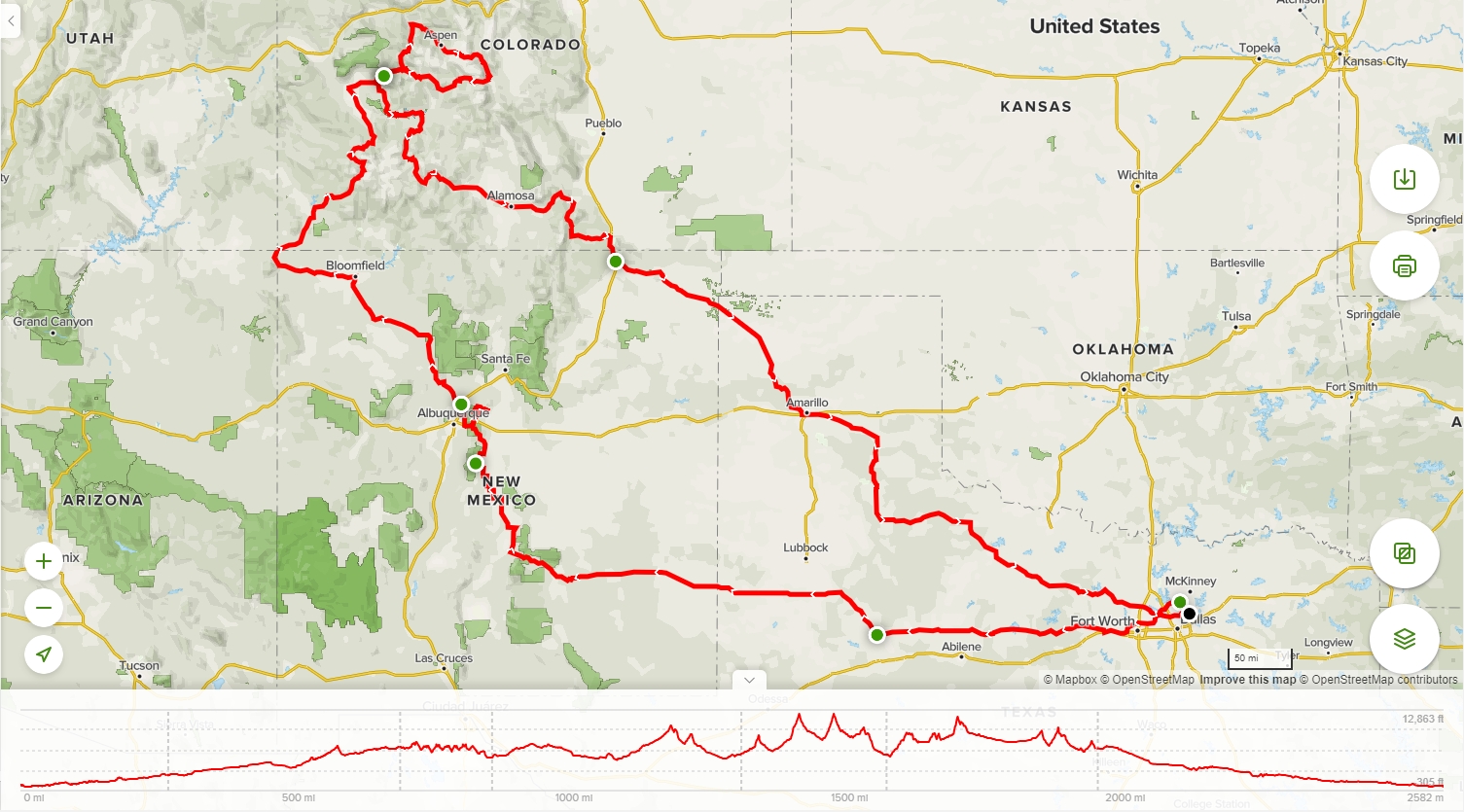