My long time friend, Mark, was going to navigate again in the Big Bend Open Road Race. This is an event where Hwy 285 is closed between Fort Stockton and Sanderson and high-performance cars run at speeds approaching 200 mph while they are attempting to get as close to their class average speed.  Sounded interesting enough to check out, and hey, it’s in Big Bend, so that’s enough of an excuse for a ride.

The drivers were meeting when we arrived at the city park, and they headed to the city hall for a car show.   A parade finished up the afternoon and the local kids were scrambling to pick up all of the candy the racers were tossing.

Saturday was a way too early rise to pack up the bikes and meet Keith and Mark prior to their start.  Our plan was to ride about 80 miles to where Ranch Road 2400 intersects Hwy 285 so we could see the cars at speed.

Not a lot of other options with the scarcity of paved roads in this part of the country.  Once we left the interstate, we rode for at least 30 minutes before we saw another vehicle.  I like that.   After the nice morning ride at high Bambi alert, we made it to the intersection where the cars were negotiating a tight corner at between 105 to 120 mph.

The 200 mph Corvair was a trip to see.  Remember Ralph Nader said “unsafe at any speed”.  Watching that Corvair coming through the turn at triple digits sort of disputes that statement.  Tom got some great shots of the cars pressing the corner.  Once we saw Keith and Mark come by, we made the 90-mile ride around to Sanderson to say hello and hear some race stories.

We pondered doing the River Road or just heading on to Fort Davis.  We knew riding along the Rio Grande would add a couple of hundred miles, and put us in fairly late due to the technical Hwy 170.  But, hey, it’s Big Bend, and we’re on bikes.  Why debate further?  It was 96 degrees when we stopped at Study Butte for energy drinks and fuel.  There were more motorcycles than cars, with many sunburned Harley riders.  I don’t know how they do it.  I’ll keep my helmet and protective gear that shields by body from the elements as well as the pavement.

Tom’s second headlight burned out on the ride, so we stopped in Presidio to grab a new one.  Hwy 67 through Marfa into Fort Davis is magical, especially in the evening light.  We dropped by the motel to check in, and then we went for some very tasty pizza.

The amber-red light was crisp on the clouds from below, and the sky behind was an intense blue.  We slowed on the road to commit the event to memory as neither of us had our cameras.  But when we realized we had made it to our lodging, we rushed to park the bikes and grab the cameras.  The spectacular sunset was fading fast, but we were able to fire off a few exposures before the light faded off of the clouds.  Once we talked with other patrons, we explained some of the spectacular colors.  Our neighbors at the motel were part of a California-based team of firefighters working on containing wildfires in the area.  While we were talking with them, they were being scrambled back again to work a fire that was threatening a ranch house north of town.

After a much-needed good night of sleep, we wandered out to breakfast at 9:00.  On a typical ride day, we have already put in near 100 miles by 9, but we were in a kicked back mode that was working well for the day.  We rode past McDonald Observatory through the Davis Mountains in the cool morning air and emerged on the north side of the hills to see the desert floor spread out ahead of us in a glorious light.

We rode the interstate to Van Horn and headed north to the Guadalupe Mountains for a drive-by on the way back home.

The ridge to the west of us kept our interest and made the straight road go by quickly.

El Capitan jutted out of the desert floor, and we stopped to capture it with our cameras.

The area east of Loving into Jal and Andrews is oil country, with pump jacks endlessly working up and down to get those fossil fuels out of the ground.  After a fuel stop in Andrews (thanks West Texas Oil Fields), we looked over at Buddy’s and figured that it was time for steak fingers after not having them for more than 10 years.  Not much longer after consuming the massive pile, we figured that another 10 years could pass without missing them.

The line of storms making up what the satellite radio weather folks were referring to as a PDS – potentially dangerous situation with tornadoes and hail, was looming in our path.  We looked at the radar images on our phones and plotted a route a bit north to hopefully punch through a couple of small super cells split from the main storm.  Right as we neared the storm, a heavy rain shaft and lightning was nearing the road in front of us.  Tom radioed over to me to hold up, and we pulled over to let it pass.  We hardly got wet as we rolled into Snyder to grab a room for the night and let the storms move on east.  The combination of 40 to 50 mph crosswinds and wet roads convinced us to take refuge. 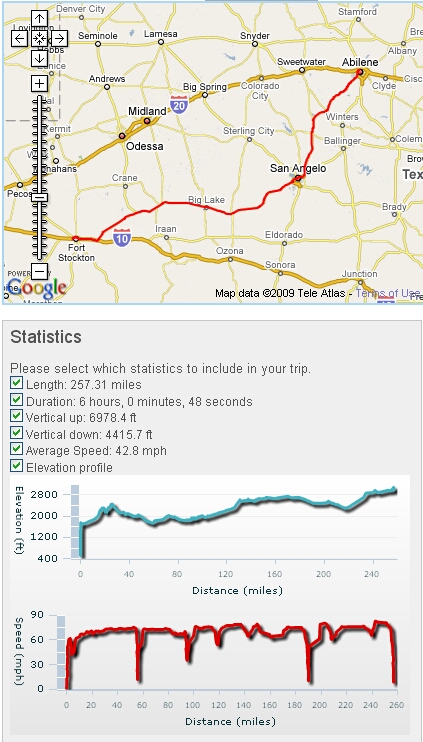 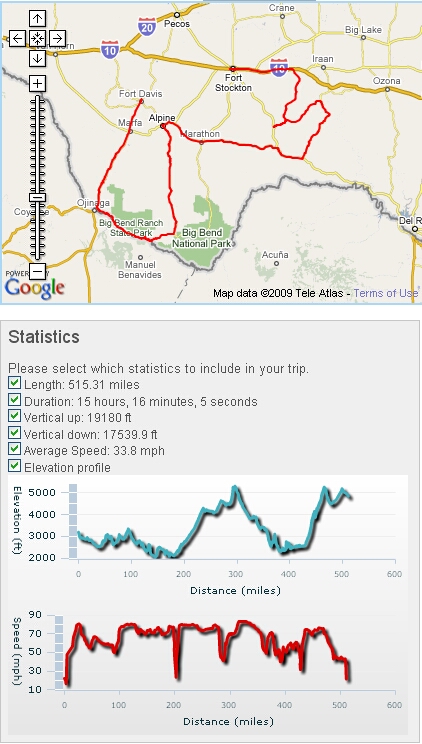 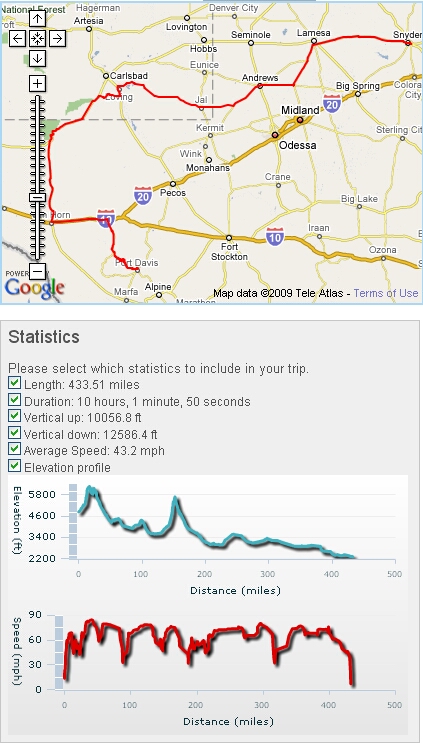 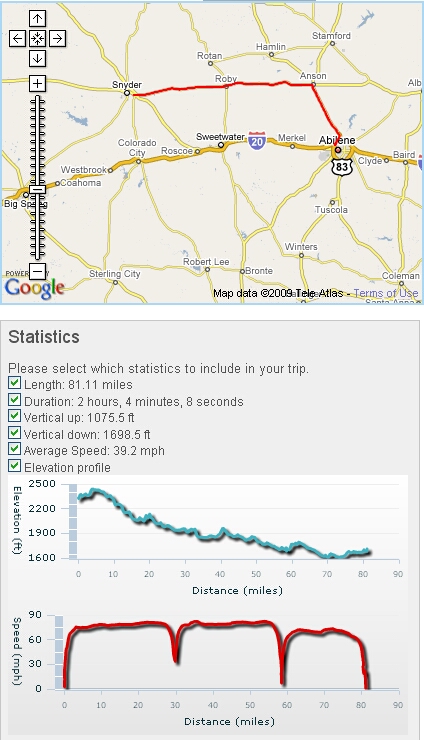 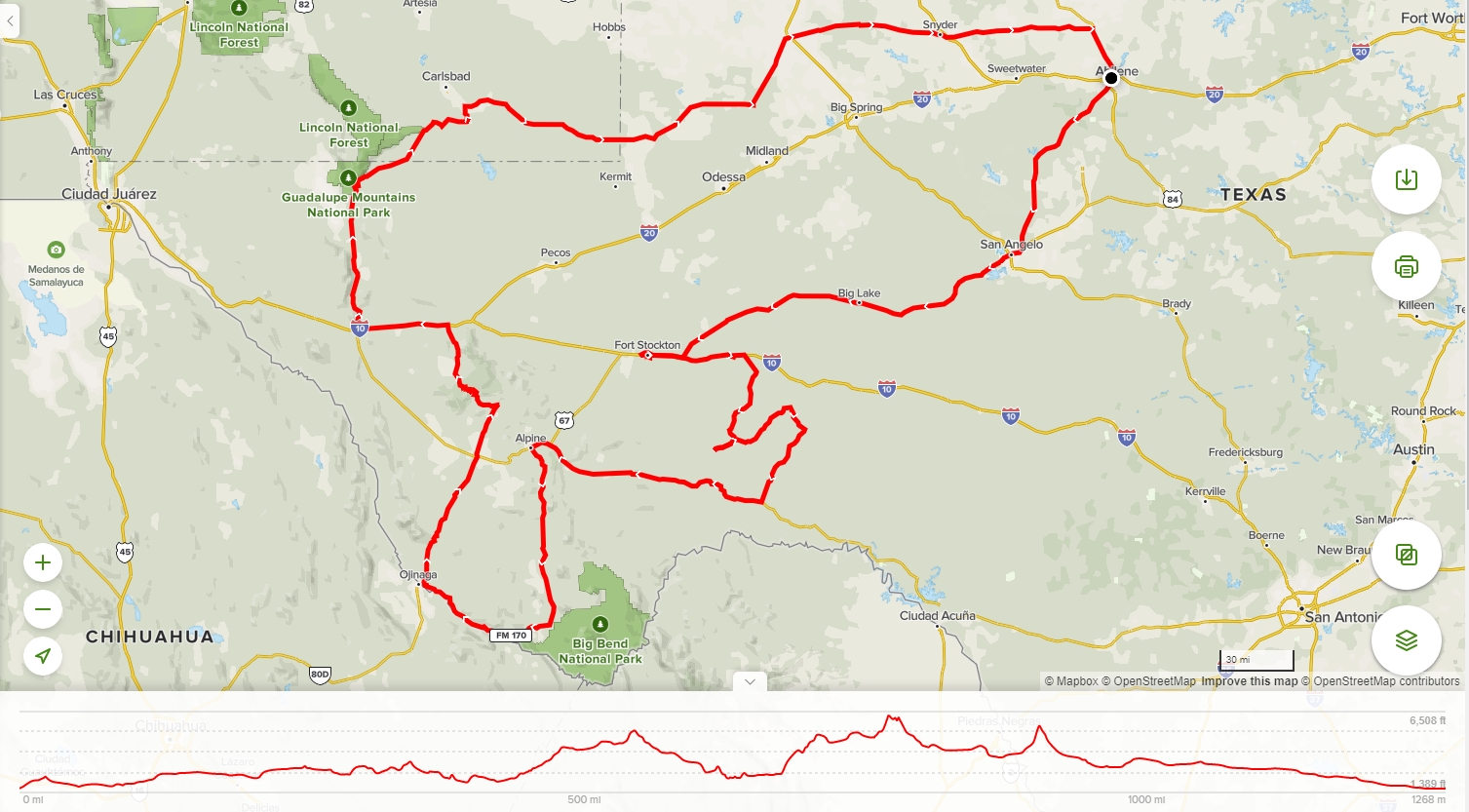