The early ride south out of Abilene Friday morning was a chilly one, but the sunny sky was a welcome change from the previous day’s snow.  My right big toe was getting numb in the cold shade of the K75S as I rode to meet the club.  Many of the riders left Thursday from the Dallas are in the peak of the seven-inch snowstorm to rendezvous in Brownwood before the Friday morning group departure.  One of our riders even crashed Thursday in a low-side and slid through the slush into a bar ditch near Weatherford.  He was OK with some sore ribs and continued the ride.  My plan was to meet the pack of riders at Menard in route after leaving Debbie in Abilene to visit her mom.  It turned out to be a good plan since I did not have to tackle the snow on two wheels. 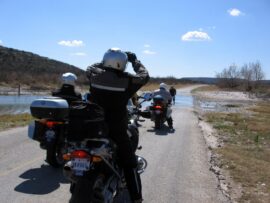 Once I joined the group led by Bo Griffin, we rode together through some small roads on the way to the Mexican border. Along the way, we stopped at Fort McKavett for a quick break. The general store there was filled with interesting relics. 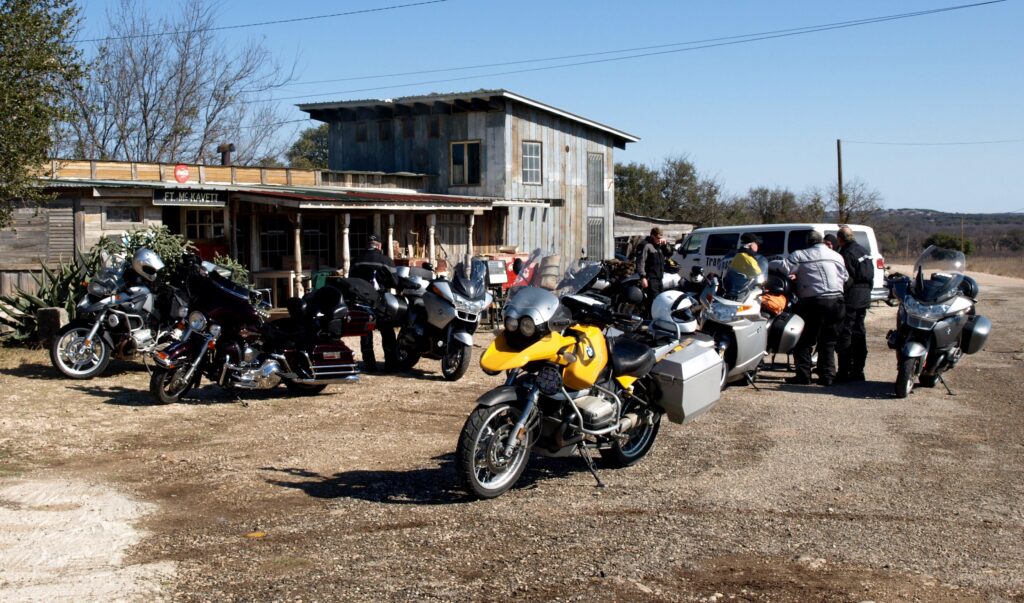 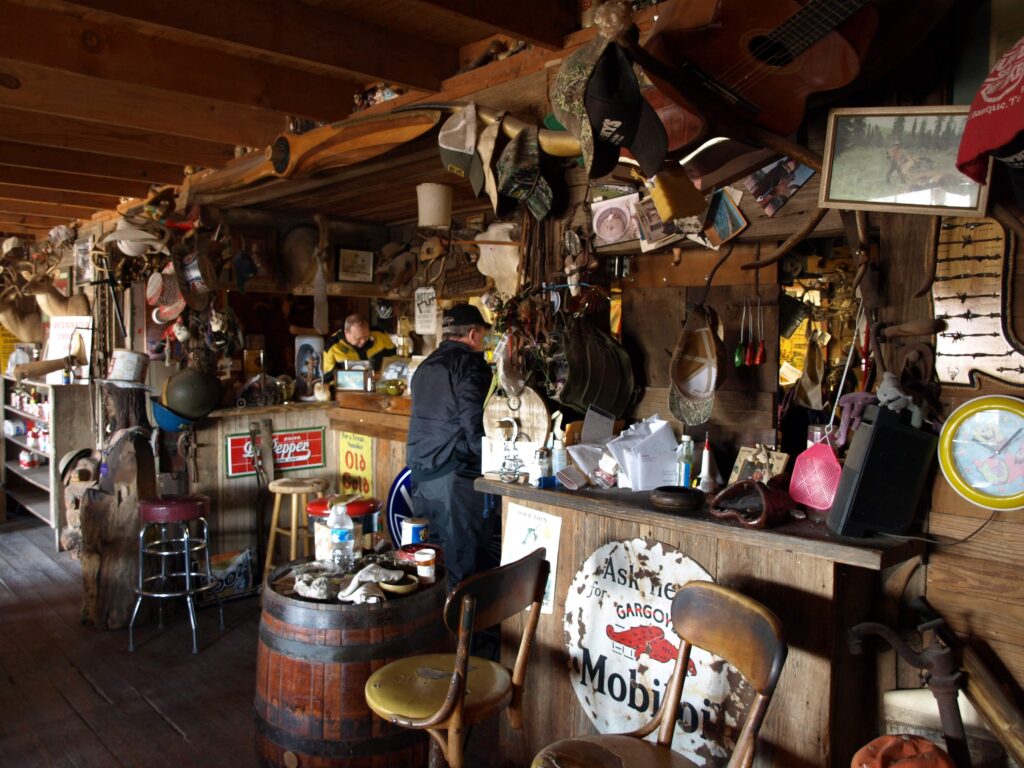 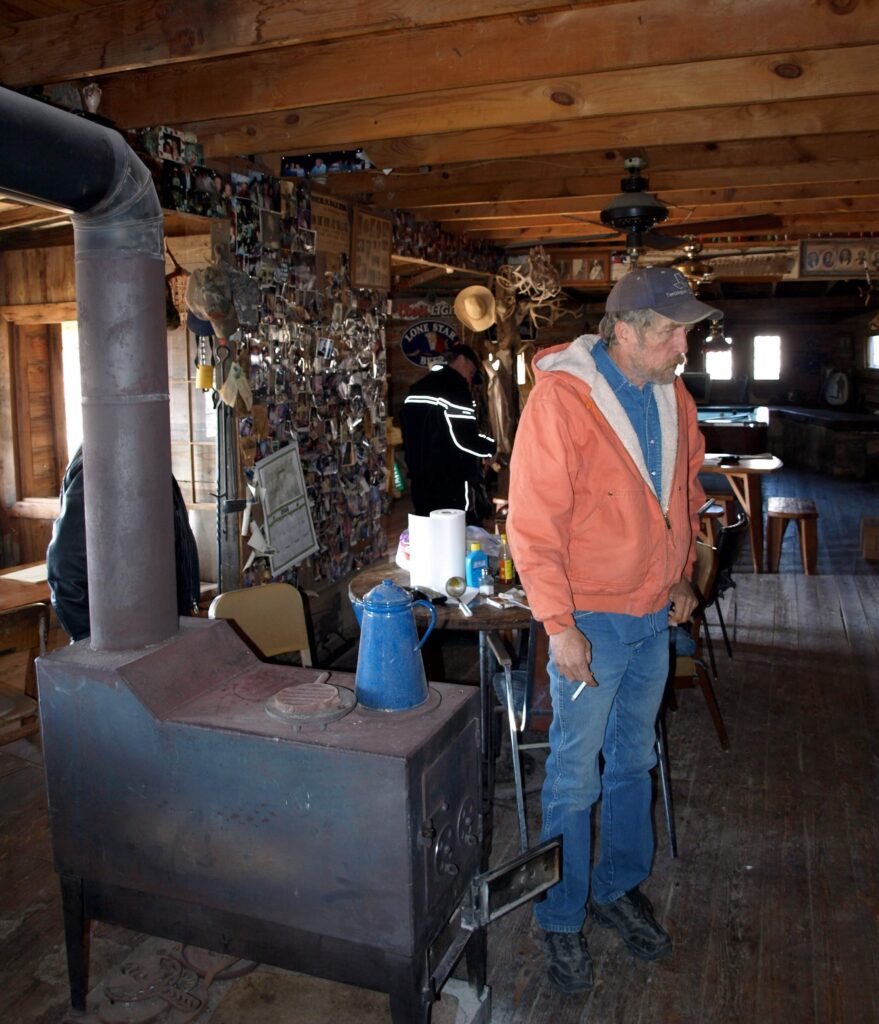 Pete has been watching over the store for nearly 20 years. 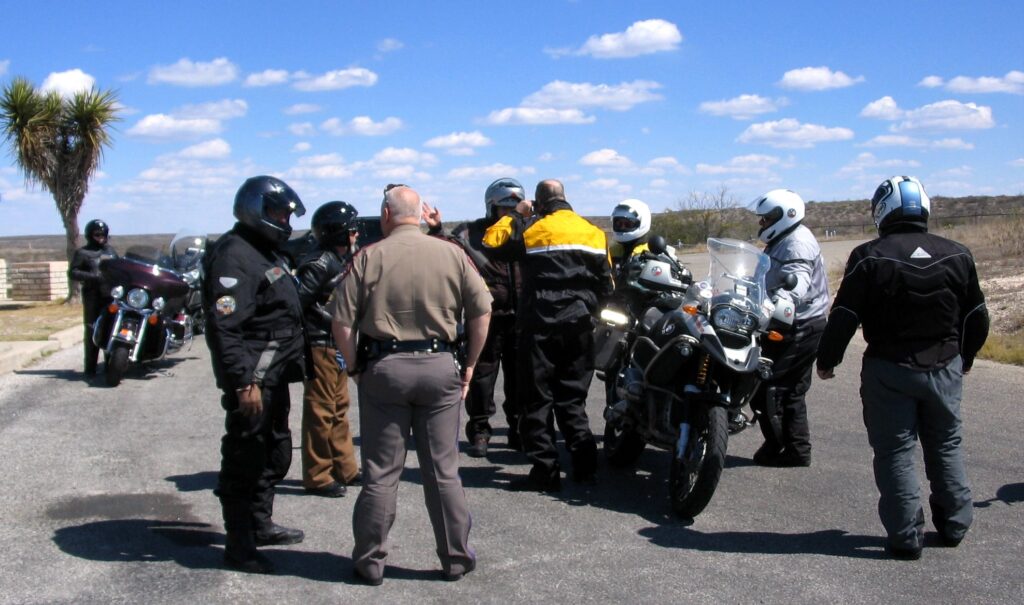 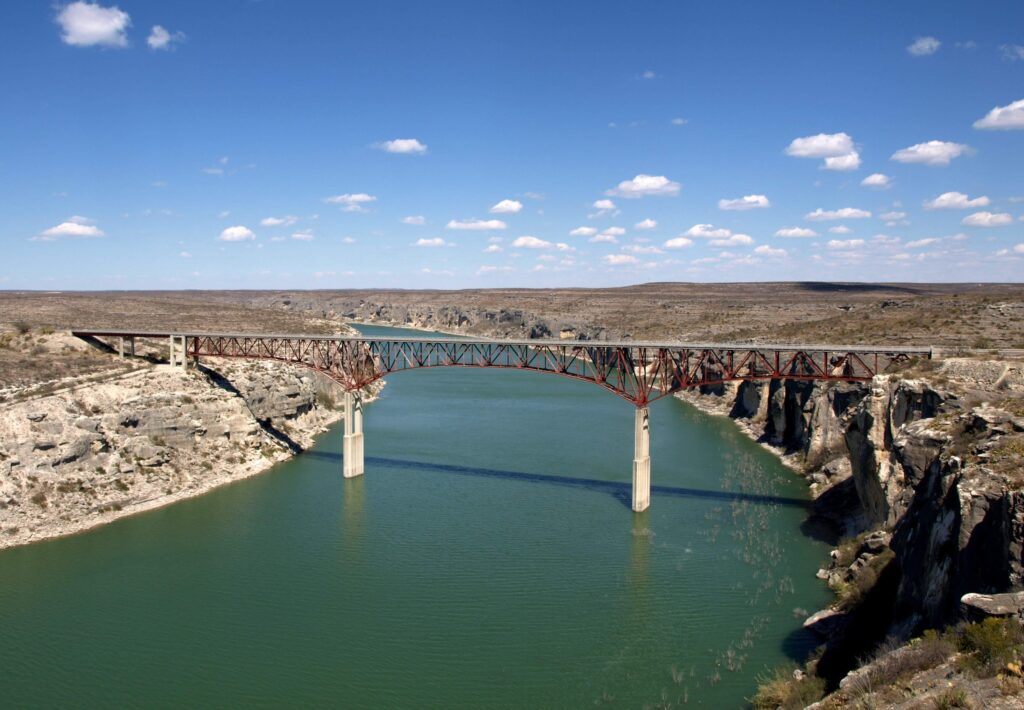 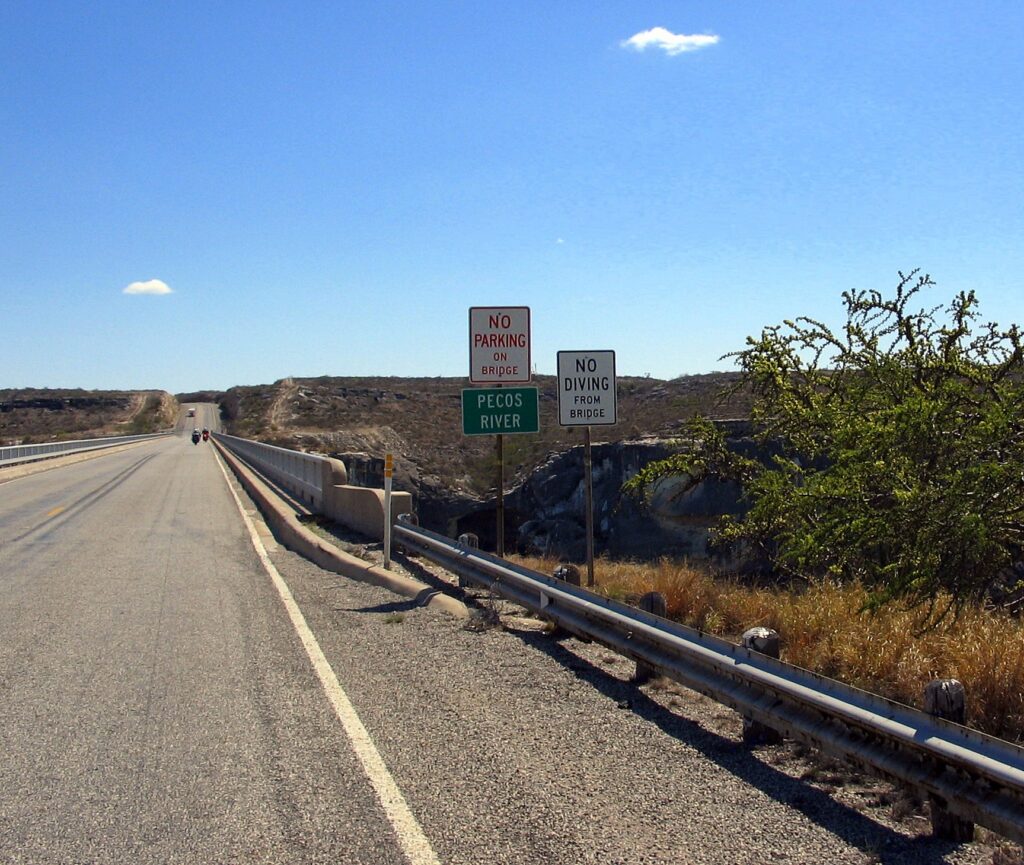 Not really sure why anyone would consider diving from this bridge!

We moved on towards Amistad Reservoir and the Pecos High Bridge. Bo had arranged for a lunch stop near the bridge, but we could not find Easy’s place. It turned out that Easy’s place was around 50 miles out of the way.  So the next quest was to find fuel for our riders that did not have big tanks. A State Trooper stopped by to see what the gathering was about. He confirmed that Langtry had some fuel. The fuel stations are far apart in this part of the country.

The ride west on Hwy 90 was a swift one at times with few obstacles to worry about. I was wondering if the highway sign was actually the speed limit. 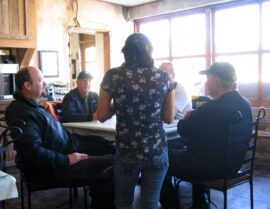 We stopped in Sanderson at an oasis of a restaurant.  The wait staff was very friendly and the food very good.  But, we were starving at this point.

The mountains started appearing on the horizon as we made our way to Marathon. Their varied shade of purple in the distance was a pleasing sight and made the ride so enjoyable. 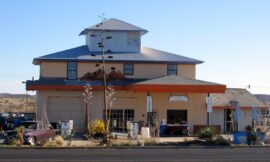 After fueling in Marathon, we turned south towards Big Bend.

The sunset was an obvious quest, and oh so difficult to capture in the camera.

In Study Butte, I met up with our riders at the Big Bend Motel. Our rooms were at the top of a hill and the whole building looked like it was ready to slide down that hill. Study Butte is an interesting place, with some residents that appear to be still living the hippie life.

Some of us had dinner at La Kiva, which was an interesting dive. We walked down into the restaurant as if entering a mine shaft. There were massive chunks of wood that made up the tables in the place, along with large tree burls that were carved into chairs. Service wasn’t too great, but the company of our riders made up for the time waiting for food.

The River Road (Hwy 170) starts from this area going through Lajitas and follows the Rio Grande very closely winding up and down steep hills.  The road would pitch me up and very quickly change directions demanding attention to avoid an undesired event.

Elke (my German mistress) found her way down a short stretch of dirt until the ruts in the road said no more.  I parked the bike and continued walking back into the desert towards some very tall hills with tinges of greenish-blue tints likely containing copper.  The Ocotillo was just starting to bloom with their red tips on the end of dead-looking stalks.  A couple of weeks more and the blooms would be a very vivid red attracting hummingbirds and bees. 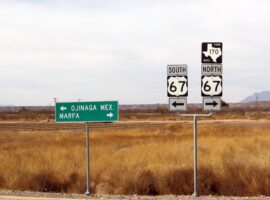 Arriving in Presidio, my stomach was growling.  I stopped at a store for fuel where the locals were grilling up some very tasty burgers.

The clouds were gathering quickly, light fading just as quick, and the temperature accordingly.  A couple of deer were hanging out on the side of the road as I left the observatory grounds.  They did not look too intimidated by me in my gear on the bike.

By the time I arrived back in Fort Davis, the majority of the club was already at the Mexican food restaurant waiting for their orders.  I wanted a cold brew, but they did not serve any libations, and pointed my across the highway to the local brew dealer.  I ran across the road, picked up my evening treat, and enjoyed it along with the tasty meal. 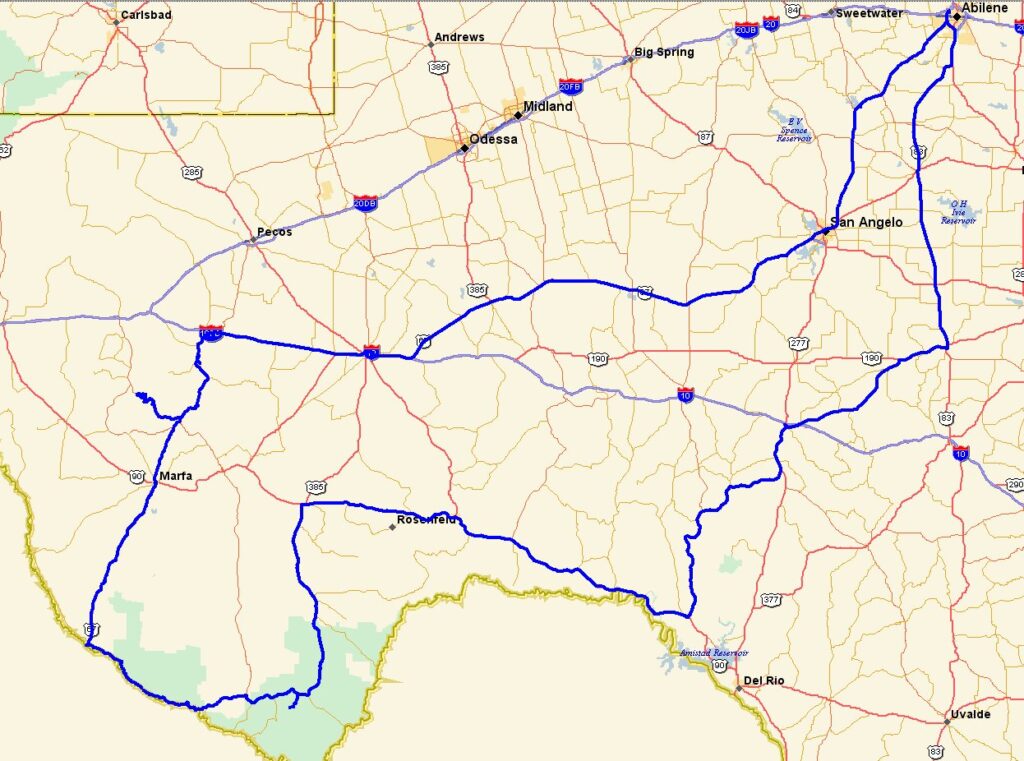